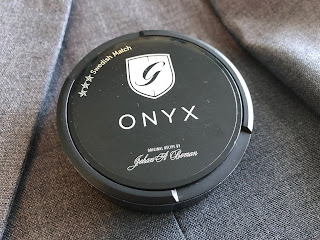 Since launching in 2006, General Onyx has been the top of the line snus in the General family. From it's elegant can design to it's sleek black portions, General Onyx truly stands on its own. For me, it's not something I use full time, but I do like to treat myself with a few cans here and there. The flavor description for this snus says, "General Onyx is the flagship of the General Snus family and the only super- premium production snus available.  ONYX is a portion snus with pure tobacco flavor and elements of Roasted Lemon, Black pepper and salt." This snus comes in a 21.6 gram can with 24 portions, for 0.9 gram portions. Onyx is classified as a strong snus, and has a nicotine content of 12mg/g (1.2%), which breaks down to 10.8mg/portion. 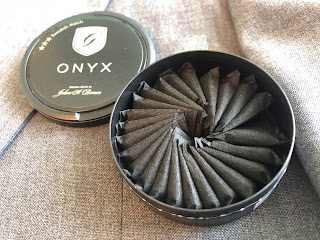 When you open the can, the first thing you'll notice is the black portions. These aren't a different type of portion, they're still technically white portions, just a different color. In the lip they still feel much like a regular white portion, but a little more smooth/sleek. The aroma is a mild smell of lemon, a gentle tobacco character, and a touch of pepper. The taste is very General-esque, but slightly different. Instead of bergamot, lemon is the predominant citrus in this snus.  It's pretty present, and adds a nice tart dimension to the flavor. I also notice more tobacco character in this one than I do in General White, for example. It seems to be a little more peppery than regular General, as well. It's a really nice taste. It's almost like a grilled lemon with some pepper on it, if I had to compare it to anything. The flavor also lasts a good amount of time; on average I can keep a portion in for about an hour. The nicotine strength feels a hair stronger than regular strength, but not too much. It's not going to knock you out or anything. 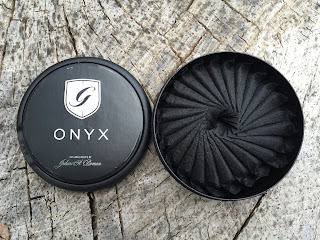 If you like the General Snus family, this is well worth a try. It is truly a top of the line product, and something everyone should try at some point!
Posted by Chad Jones at 1:47 PM