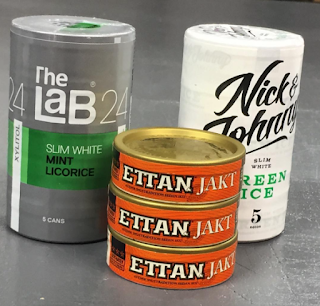 This morning our friends at Snus2.se posted this photo on their Instagram page showing some new Swedish Match products. One isn't really news, we previewed the two new Lab products (Lab 22 Slim White Mint and Lab 24 Slim White Licorice Mint) earlier this month, but two are completely new to us.

The new Nick and Johnny product is called Green Ice and will come in a slim white portion.  The flavor profile from what I've heard is wintergreen, spearmint and eucalyptus.  The other is a product called Ettan Jakt. 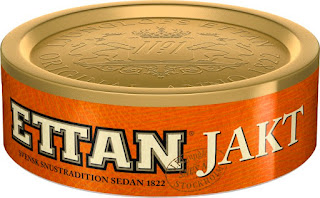 I was able to find out some more info about Ettan Jakt via this press release. It appears to be the same product as Ettan Los but in a different fall themed can.

For the autumn season launch Swedish Match is a special edition of the prestigious brand Ettan. It's called Ettan Jakt (Hunting) and is a limited edition design of Ettan Loose. Ettan Jakt (Hunting) manufactured in 82 000 copies and will be sold by the end of August at OKQ8 throughout the country, the Swedish Match stores in Stockholm, Gothenburg and Strömstad, as well as in selected tobacconists, particularly in the North.

- It is particularly gratifying to note Ettan is Sweden's oldest snus brand. Ettan has been around since 1822, is strongly associated with tradition and has a loyal clientele. The design has for very many years been almost unchanged, but I believe that consumers will like to go. Not least in the North where more than one in seven consumers run a Ettan-box in his pocket, says Mediha Budak Gustafsson, Brand Manager, Swedish Match.

Ethan Portion is the single best selling snus product in the North and is characterized by its pure tobacco flavor close. The basic recipe is the same as when it was created: tobacco, salt and water.

- We care about our almost two year mark and have therefore allowed the choice of the name and design influenced by that which characterizes the Ettan, namely, tradition, natural simplicity and quality. We are very proud to be a traditional product that Ettan in our catalog and also the high quality products maintain. It feels nice to the launch of the Ettan Jakt (Hunting) gain direct some attention to the traditional loose snus, says Mediha Budak Gustafsson."

I will update this post as I receive more information on the new products!
Posted by Chad Jones at 6:42 AM