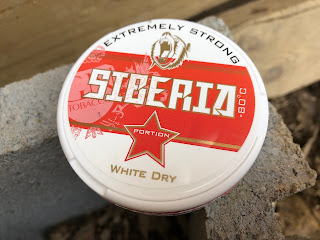 When Siberia Red first launched, it was, at the time, the world's strongest snus.  However, it has been surpassed.  But since then, I've watched this product become one of the most popular snus products on the market.  While this isn't something for me, I know quite a few people who use this regularly.  Siberia comes in three types - Siberia Brown (Original Portion, 43mg/g), Siberia Red (White Dry Portion, 43mg/g), and Siberia Blue (White Portion, 24mg/g).  And all three of those come in a regular sized portion and a slim portion. When it comes to this product, the flavor description says, "A super strong snus with a taste of mint". This product comes in a 13 gram can with 17 portions for 0.76 gram portions. The nicotine content is 43mg/g (4.3%), which breaks down to 32.88mg/portion. 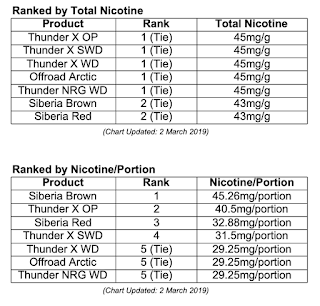 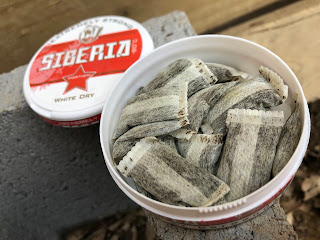 When you open the can a very sharp aroma of mint comes through.  For a white dry portion, these are surprisingly soft. Most white dry portions are more on the dry side and not as comfortable until they get moist, but these are quite comfortable in the lip.  Upon putting the portion in your lip you feel a slight cooling tingle mixed with a little burn.  It's interesting to note the balance between the cooling sensation and burning sensation.  There is a very sharp and biting flavor of spearmint with a mild, but dark tobacco flavor in the background.  The nicotine kick is insanely strong, and it hits quick.  I feel the nicotine kick in in under 10 minutes, and it hits like a truck.  I can't keep these in long, so I can't speak to how long the flavor lasts, but most white dry portions last 1-1.5 hours on average.

If you like mint snus and want something insanely strong, you may like this.  It's not for me, and I only use it when I review it.  I do like to offer this advice though - don't make this your only snus.  I've seen people raise their nicotine tolerance with this stuff, and they can't adjust to regular snus.  So my advice - if you like this, make it an occasional product, but not a full time product.
Posted by Chad Jones at 4:57 PM