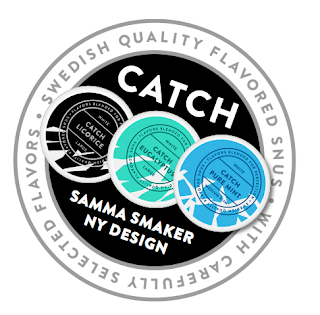 Swedish Match is a company that is pretty regular about product redesigns. The Catch brand is no different. I've seen the Catch brand change labels several times now, and while I enjoyed the most recent design, I do concur with their decision. The recent change to the Catch brand did make all the products look the same, and they were hard to tell the difference between, so changing the labels is a good decision, in my opinion. This will begin rolling out soon - and the way they're doing it is pretty smart. They're keeping the old cans, but you can peel the top label to reveal the new label. I suppose to help the snuser adjust to the change. And then in time, the new design will take over and be the only one available. 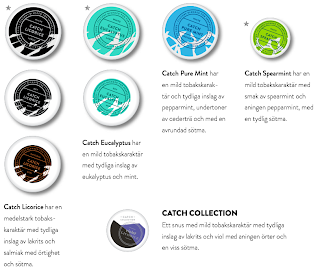 Swedish Match said, "When Catch Licorice snus was launched in 1984, the brand was first placed on the Swedish market with pouches with non-traditional snus flavor. 30 years later has Catch-family has grown and now includes a variety of products. We have for some time been informed that our current designs makes it hard for customers and consumers to distinguish products from each other and we have therefore developed a new design that will be on all Catch Cans in September. We hope the new design will facilitate the separation between the different products in Catch-family. During the summer, selected Catch products have a label that informs you that new design is in the works. " 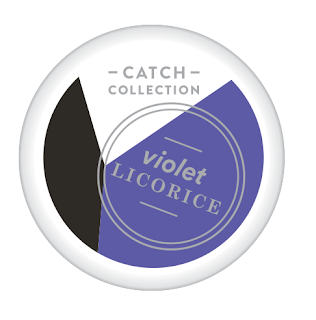 The next snus in the Catch Limited line will be a return of Violet Licorice. I reviewed this in August, 2009 and enjoyed it quite a bit. My review of it said, "This product has an interesting smell - upon opening the can you catch a wiff of fruit, followed by a slight hint of violet and I want to say lavender. The can is really girlie, it's a really pretty purple color. I figure this portion of the line is geared more towards women. The snus itself is a mini white portion. In all senses of the word, it tastes "purple". The flavor is very refreshing. Quite different from any snus I've ever had before. It almost doesn't taste like Swedish Snus, but at the same time is also way better than American "snus". Catch has created a snus that delivers a good nic content, as well as an interesting flavor of fruit, lavender, and violet. I have had this product in for almost 30 minutes and have yet to pick up a hint of licorice." 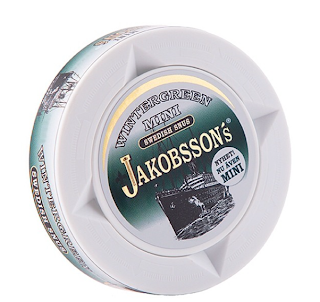 In other snus news, Gotlandssnus is launching the first Wintergreen Mini that the snus world has ever seen. They said, "Have you tested this? A smaller pouch that has a refreshing mint-like flavor. Available for purchase in our webshop - shop.gotlandssnus.se. A small pouch with refreshing and clear taste of Wintergreen with hints of mint and sweetness. Wintergreen is known for its strong, mint-like flavor reminiscent of chewing gum Jenka."

I reviewed Jakobsson's Wintergreen back in 2010. My review said, "The portions are great - they're original portions, and I compare the moisture content to Offroad Frosted (which is one of my favorites). It's moist, but not dripping, which means the snus holds the moisture quite well, and that's something I really value in a snus. The aroma is Wintergreen, but not OMG Wintergreen like I'm used to, it's actually kind of pleasant, it's pretty mild stuff. The portions are very comfortable in the lip, a little burn at first, but it doesn't last too long - it comes with quite a kick though. This being a Strong portion, that is expected. And the taste? It's actually pretty good! I'm not a fan of Wintergreen, but Gotland's has made a Wintergreen snus that is so pleasant and enjoyable, I think everyone can enjoy it. The taste is mild, wintergreen, and slightly sweet with a very gentle salt balance, but not too much - it all mixes together very well."
Posted by Chad Jones at 9:41 AM