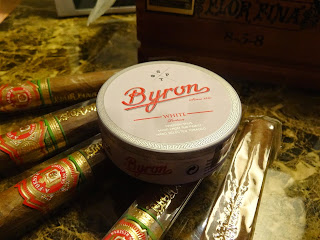 Since I first reviewed Montecristo in 2009, I've been a big fan of these Cuban Snus products. Tobacco from Cuba, Water from Norway, made in Sweden. A simple premise for a beautiful snus. For those in America, it's a shame that people can't get ahold of this, because it's truly delicious. That embargo has to end someday, I hope. A friend in Europe was able to get me a few cans of this for review purposes, but for those of you in Europe who can get this stuff, I know The Northerner sells it online, and I know it's sold locally in shops, as well. 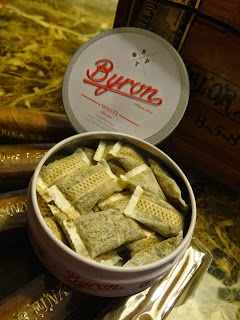 I wrote a few months back about the name change to Byron, so if you're unfamiliar, this article should bring you up to speed on that. As far as the snus, it's basically the same thing/recipe, just a different tobacco. The aroma is a gentle Cuban Tobacco aroma - if you haven't experienced this before it's very aromatic with a touch of floral and bergamot hints. The "white" portions are not as white/dry as most I've had in the past, but this portion isn't nearly as wet as an original portion. Somewhere in between, if I had to guess. The flavor is just as good as it's original portion counterpart. A taste of Cuban Tobacco with floral hints, a mellow salt balance, and a tiny dab of bergamot in the background. If I could get this in the states, I'd use it everyday. That's how good this stuff is. So if you're somewhere that you can get it, check it out, because it's fantastic.
Posted by Chad Jones at 2:04 PM