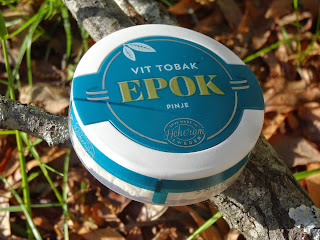 These products have been discontinued and are no longer for sale.

Since first hearing about the new Epok line of snus, I have been very intrigued. The term "Vit Tobak", or "White Tobacco" interests me as well. I'm not a big fan of the "purified" line of snus - I know there are people out there who dig them and use them, but I'm not an enthusiast about them. So let's dive into these reviews and see what Epok is all about.

First, Epok Pinje, described as " Epok is made on white tobacco and has white pouches so its a completely white snus. Epok Pinje has a fresh flavor with hints of pine and juniper berry." 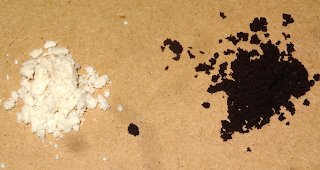 You may be asking, "What is White Tobacco"? I know I was curious.  In this photo, the white tobacco is on the left, and regular snus tobacco from a portion of General Original is on the right.  White Tobacco is something the manufacturer, Winnington, came up with. It's regular tobacco that has been "cleaned" or "washed" in a process that, as they put it, "removes many of the hazardous ingredients that you find in regular tobacco". Knowing how safe snus is, it makes me curious why they felt the need to "purify" this and make it "white tobacco". But people are into purified snus, so I'm sure that was a factor. 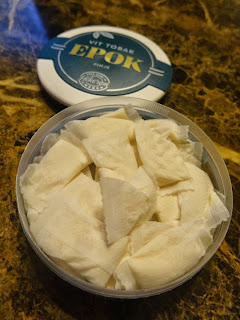 In the past, I've reviewed other purified snus products, such as Al Capone Mint. These have similar white pouches, but are more dry. These pouches are about the same size as regular snus portions, and are actually more moist.  Epok Pinje has that same smell that past purified snuses have, it's hard to describe unless you've smelled one, but the best I can do is say it has a "clean" smell.  I don't pick up the juniper, but there is a sharp pine aroma that comes through when you open the can.

As far as the taste goes, this isn't one I could get into.  The pine taste is very present, but I couldn't pick up the juniper.  The taste is a little too overbearing, it has that clean taste that is common with these products, along with the sharp pine flavor, but it's a bit too much, I couldn't get into this one. 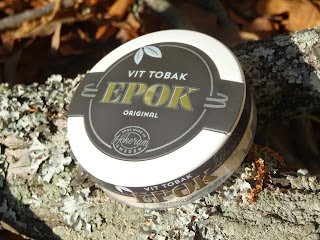 Epok Original is described as, " Epok is made on white tobacco and has white pouches so its a completely white snus. Epok Original has an aromatic flavor with hints of oak and dried fruit."  When you open this can, the clean aroma is a little dialed back, and a natural/wood-ish aroma comes through with a subdued fruit smell, kind of like what you would smell with a fruitcake. 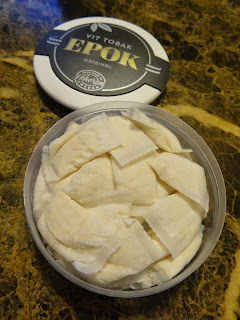 The taste of this one isn't as bad as the Pinje. It has a sharp peppery flavor, with a mild tobacco taste, and a tiny amount of subdued fruit flavor in the background, but hardly present like you would find in something like Roda Lacket.  There isn't much salt in this one, either.  This one, although not as bad as the Pinje, still wasn't that great.

I really don't know who to recommend this to.  If you like the purified line of snus, I'm sure this would be up your alley.  Or if you're one to try anything new that comes out, you could check it out.  But in the end, these two weren't for me.
Posted by Chad Jones at 7:37 AM