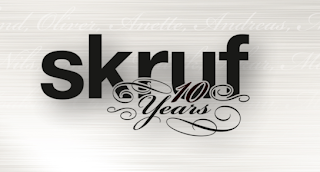 Skruf is currently celebrating 10 years with a new "Tack!" edition of four of their popular brands - Stark Original, Stark White, Tranbar (Cranberry) White, and Stark Los. Skruf says, "We are celebrating our 10th anniversary and doing it by saying thank you (tack) to all people who has been with us for the past 10 years. Four of our biggest products in the Swedish market will during a limited time have the tack design and also include more snus (+2 portions/3 grams for lös)."  Skruf was one of the earliest brands of snus I tried out when I was new to snus, when I did a "Cranberry Snus Deathmatch" (yeah, I was kinda cheesy back then). I've followed them closely for several years, so it's cool to see them celebrating such an important milestone. I figure rather than review their products, which I've done a TON of, I'd talk a little about Skruf's history instead, because it is rather interesting.

From their About Us page:

"Skruf was started by two lifelong friends who saw the opportunity to make a big future for a small product. Jonas Engwall & Adam Gillberg. Lifelong friends and entrepreneurs, Jonas and Adam, sat down in 2001 to discuss how they could use their skills gained in the finance industry to build a business in Sweden in an area they were passionate about. They wanted to create a Swedish product, something special, and something authentic. They found it in the most unlikely of places, the Swedish snus market. If you ask Jonas and Adam today why Skruf has succeeded, they have a clear answer. "We began as a rebel movement, offering a cooler, premium and extremely personal snus. Quality and individuality comes first, and if you want to make a statement with a bit of attitude when choosing snus then you really only have one choice: Skruf."


With only a modest amount of money to realize their dreams, they started traveling around the country and did research on the Internet to see what they could learn. This resulted in awakening the interest of well-known Swedish marketing guru, Michael Storaker and a researched called Kent Sandh. They jumped aboard with a small, little snus product they had been making locally, in a tiny place called Skruf, located in Smaland. The brand had just been born. They started to crank up operations at an old dairy factory in late 2003. They tried different formulas until they finally succeeded in making snus they could be extremely proud of which could go head to head with any quality snus already on the market. With a high quality and a robust product behind them, fortune smiled on them again when they came across a forgotten "forest fruits" lemonade bottle in the back of a cupboard. With some adjustment and recipe magic, it became the catalyst for Skruf Tranbar.

So they had created a great product, but the question remained - how to tell people about it with the marketing restrictions on tobacco in Sweden? A great product needs a great package and something that separates it from the crowd. Most snus cans are traditionally in dark, earthy colors, so let's change that! THe little white Skruf can was created and word-of-mouth marketing took them from there. In spring 2004 they launched in Norway and were featured on Norwegian primetime. The very next day 1 million Norwegians were hunting down the Skruf product. Market share increased from 0% to 4% overnight.

After their successful entry to the Norwegian market the international players began to take notice. Here was a successful startup with potential and a great range of product aimed at the trendy and demanding consumer group. Imperial Tobacco initiated talks and consequently bought into the Skruf phenomenon to further fuel international product growth. Today Skruf is owned by Imperial Tobacco - the world's 4th largest tobacco company - with a total of more than 10 million cans of snus per year in Scandinavia. With the merger between Skruf and Imperial Tobacco the portfolio greatly extended - in addition to snus, Skruf now also offers international cigarette brands such as Davidoff, West and Paramount. Skruf is very proud of it's heritage from small beginnings in Smaland, working tirelessly to create the perfect snus. Skruf strive to always celebrate quality and individuality, it's what Skruf stands for today, and in the future." 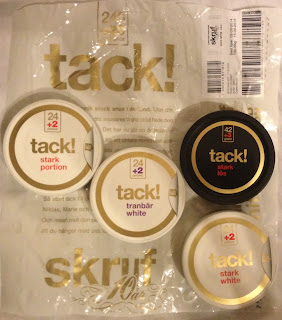 Keep an eye out for these Tack! cans. As of now, the only webstore I know that has them is SnusBolaget, but I'm sure local B&M stores in Sweden as well as other webstores will have it soon. Congrats to Skruf for 10 years, and here's to many more to come!
Posted by Chad Jones at 6:02 PM