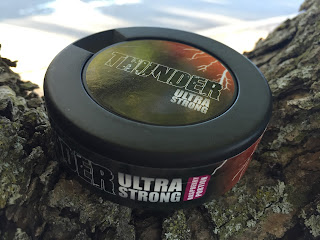 In May, 2013, V2 issued another statement on their Facebook Page, saying "Let the voting begin for the next Thunder Ultra portion taste, one vote per person. Since we have to many options, you need to type it in as comment :-)". The flavor options were Raspberry, Licorice, Vanilla, Brandy Alexander, Wintergreen, Chocmint, Raisin, Coffee, Green Tea, Strawberry, Whiskey, Bacon, Apple, Blueberry, Cinnamon, Eldeberry, Rum, Root Beer, Blackberry, Strawberry-Banana Mint, Peach, Licorice Peach." Some weird, some traditional - but in the end it came pretty close with Raspberry besting Brandy Alexander, which bummed me out. But, the surprise came when V2 said they were going to release BOTH of the top 2 snuses in a limited edition release. I recently reviewed (and LOVED) the new Thunder Brandy Alexander (Ultra) and just got ahold of some cans of Raspberry. It's taken me a little while to do a review on this because it's so damn good. 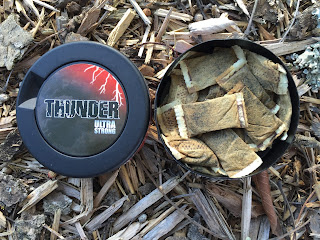 The taste description says, "Thunder Ultra Raspberry Portion - V2's facebook friends made their choice and V2 fulfilled their wish! Ultra strong as every Thunder Ultra, but with a new exciting flavor of sweet and fruity raspberry!" I will agree and disagree with that description. But first, the aroma. When you open the can, the aroma that comes through is a lot like raspberry preserves. The portions are very moist and quite full, and very strong. The taste is a very fruity raspberry taste, it's very clear - not just a berry taste, but it is identifiable as raspberry. The taste is sweet, as the description says, but I don't want that to turn you off if you're not into sweet stuff. It's not overbearingly sweet, the taste of raspberry is very natural and done just right so that the flavor compliments the tobacco, but doesn't come through with a pound of sugar to punch you in the face along with it. It's a very pleasant flavor and V2 did a great job putting raspberry into a snus, remember, this hasn't been done before. I urge everyone to try this, no matter what you use or like. Warning, it is strong, but the flavor is well worth it, for lovers of stark snus and lovers are regular snus. This one is definitely one to check out!
Posted by Chad Jones at 5:42 PM