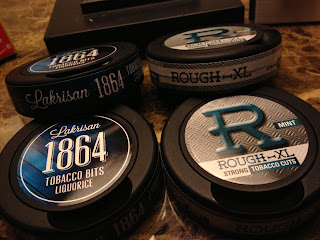 Last year, I reviewed some tobacco cuts from AG Snus - Blue Ocean and Jagarpris. Quite good, and very different from the usual snus or dip that I've tried in the past. They've recently added two new SKU's to their brand line - Rough XL Strong Tobacco Cuts & Lakrisan 1864 Liquorice Tobacco Bits. One comes as tobacco cuts - and these are bigger than the usual tobacco cuts - and one comes as tobacco bits, which are a little bit smaller. The Rough XL Strong were the first ones I went for, because I was the most curious about them. When you open the can, the aroma is a classic tobacco smell, much like pipe tobacco, with a lingering hint of mint. The cut itself is rather rough, so it's a bit uncomfortable until it gets moist and starts to break down a bit. The flavor is very good - a robust tobacco taste with a very small hint of mint in the background. And as the name says, it's definitely strong. If I had to compare it with snus and guess, I'd say probably 15mg/g-17mg/g. 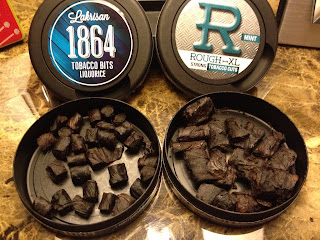 The 1864 Lakrison Bits are different from the cuts. Much smaller, I put two in my lip, and much more soft and moist. The aroma is a mellow balance of licorice and tobacco. The flavor is reversed in balance, the licorice flavor is a little more present than the tobacco, but the tobacco is very flavorful and robust as well, much like a good pipe tobacco. Even if you aren't a fan of licorice, this one presents a different balance of flavor from usual licorice snus/smokeless products. I'm not sure where these are being sold, but if you see them, they're worth a try!
Posted by Chad Jones at 2:53 PM