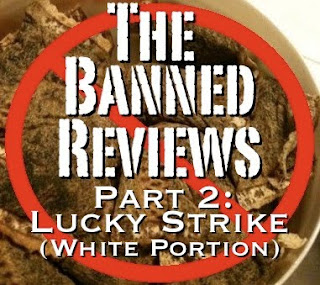 Second in our "Banned Reviews" series is Lucky Strike: White Portion. As I mentioned in our last "Banned Review" about Gustavus, this isn't just me reviewing stuff most of my readers can't get to be an asshole. We also have a large following in other countries, so this may be helpful to them as well. In part, it's my way to write about snus that I really love, but may not be able to have again, and to help those in other countries who may be thinking about trying this snus for the first time. Lucky Strike (White Portion) is an excellent snus, and I've been wanting to do this review for a long time.

Sometimes I feel lucky and sometimes I feel cursed. I came into snus in the early part of 2009. At that time, there were no FDA restrictions, no PACT Act, no brand restrictions; you could buy whatever snus you wanted with no issue. Sadly, those days are over and Lucky Strike is a snus that cannot be brought into the US. In essence, it's a double banned snus. Firstly, because RJ Reynolds has the Lucky Strike brand name in America, they are not allowing the F&L Product (F&L was recently purchased by British American Tobacco) to be brought into the US. Rumors have been circulating that RJR may try to make an American Lucky Strike snus, which I truly hope isn't true. After they bastardized Swedish Snus into their Camel "snus" product, I hope they can leave the Lucky Strike name alone, because it is a name with truly great tradition. Second, F&L is a brand that isn't going along with the FDA regulation, so F&L products can no longer be shipped to the US. So Lucky Strike is double banned. 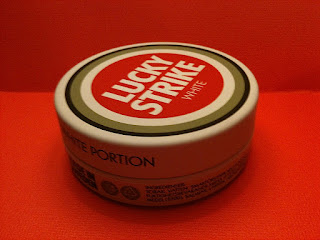 I've gone on record and said that this can (along with the old 1847 can) are the coolest snus cans out there. The Lucky Strike family comes in a cool metal can with the familiar Lucky Strike logo on it. The white portion can sticks the most close to the Lucky Strike imagery you associate with the rich history of the brand. At one point in time, the "It's Toasted!" used to be on the cans, but that has since been removed and replaced with a reminded of what type of snus is in the can. Now, let's talk about this snus. The aroma you are greeted with when you open a can of Lucky Strike White Portion is a very pleasant, unique aroma. An aroma of pure, toasted tobacco mixed with a little pepper greets you and tells you that you're about to experience a snus that stays true to the Lucky Strike name. 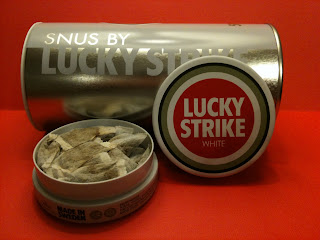 The ONLY complaint I have about LS:White is the portions. The snus is rather compressed, so when you take a portion out I do suggest you roll it around in your fingers to loosen it up. After you do this, the snus is soft and fluffy, and the portion is ready to go into your lip. The taste of Lucky Strike is very simple and pure, but mellow at the same time. The tobacco has the toasted taste of it, much like the American cigarette brand, and a little pepper in the background along with a very mild salt flavor in the background. All this ties together to have a very pure tobacco flavor without the presence of a lot of citrus, which is common for most "traditional" or "unflavored" snuses. Lucky Strike White Portion is one of my regular snuses, and I'm fortunate enough to be sitting on a large stockpile of it. But as it is now banned (twice, mind you), once I'm out, I'm out. But I will enjoy every single portion until then.

If you're in another country that allows the sale of Lucky Strike: White Portion - I can't impress upon you enough - TRY THIS SNUS! If you're a fan of traditional flavored snuses, pick up a can of Lucky Strike and give it a try. It really is a great flavored snus.
Posted by Chad Jones at 9:14 AM