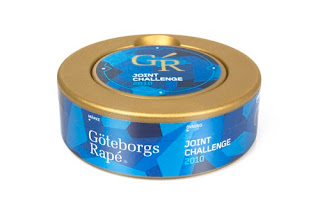 I saw my buddy @worldofsnus mention this on Twitter and thought these cans were really cool. I heard a little more about them this morning and wanted to talk a bit about these limited GR cans. It's a camo look to the Goteborg's Rape can made just for the Swedish Armed Forces final military exercise called "Joint Challenge". They were sold around May in a unique, limited camo design - around 3500 cans were made. Some of these may be making their ways into webstores, I'm not really sure, but they have a really cool design. From what I'm hearing, SnusAuction.com is going to have them, so if you're a GR fan, keep your eyes on SnusAuction and you may be able to pick one up there. 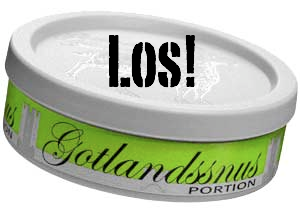 Another little piece of news I saw today that excited me was over on the SnusOn Forum, Jimmy Karlsson who does R&D for Gotlandssnus announced that Gotland's Green was available in limited edition, only in bulk, in tobacco stores in Stockholm. "After a long experimenting time i manage to combine Elderflower flavour with the tobacco base. I im sorry that it is only sold the concept "loose snus in Bulk" and only in Stockholm, as for know.". If you're not familiar with Swenglish, I'll translate. Gotland's has been able to make Gotland's Green into a los, but it's only in limited amounts and only in Stockholm. Even though this is a bummer, I think this is awesome news because it's a chance that someday we may see this available for sale outside of Sweden. Gotland's Green was one of the first snuses I tried and one that I still enjoy today. It's a great snus and I'm excited to have a little more hope that someday it might appear for us. Fingers crossed! 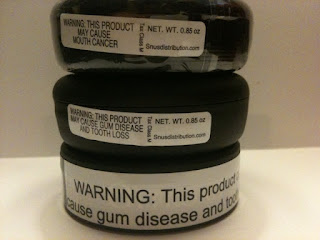 Also, if you guys have noticed, some of your orders coming in lately are already starting to see the FDA mandated warning labels on snus. In a recent order, I saw these warning labels - the top 2 are Olde Viking Original, the bottom can is Offroad Frosted Los. I've been vocal before in an article about product warnings on snus, so this isn't a new topic for me, but it still pisses me off to see these blatant lies on snus. Especially my favorite one: "This product is not a safe alternative to cigarettes", which is the biggest lie I have ever seen - even on the level of "I did not have sexual relations with that woman." If you're new to snus, or just reading and researching snus - do not believe these warning labels. Do some research, at Snubie.com I have a large collection of articles on Snus & Health, there's a large collection of them at SnusCENTRAL.org, as does Swedish Match. Check out these articles, read up on it - and these warning labels will piss you off as much as they do me. Snus IS a safe alternative to smoking, and don't let anyone tell you otherwise. The anti-tobacco camp wants to push this nonsense into your head, but read up on it, check it out, and you'll learn that the warning labels they enforce on snus are quite simply not true.
Posted by Chad Jones at 12:57 PM