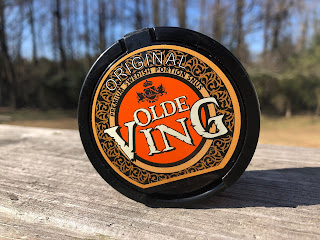 It has been quite a while since I've had this one.  Anytime I talk about GN Tobacco, this is a product I always bring up.  In my opinion, it is one of the best products GN Tobacco makes.  And no, not just because the name reminds me of  Old Gregg.  This line used to actually be called "Olde Viking", but due to some licensing issues they changed the name.  This is a no-nonsense product:  good, traditional taste and a normal nicotine strength.  It's been a while since I've found a store that sells it to the US, but the new SnusMe.com store stocks the whole Olde Ving line, so I figured I'd grab some and give this a revisit!  The flavor description says "A traditional tobacco blend with traditional and well rounded Swedish tobacco flavor." Each can weighs 18g and has 18 portions, for 1 gram portions. The nicotine content is 8mg/g (0.8%), or 8mg/portion! 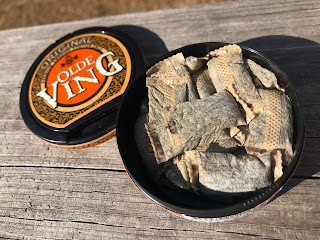 When you open the can, the aroma is a light and airy citrus smell accompanied by a mild floral sweetness, a light touch of pepper, and a mild tobacco character. The portions are plump, and feel great in the lip! In the flavor profile, the citrus is front and center. It is lightly sweet, and has a light hint of pepper. There’s also a mild tobacco character in the background as well. The nicotine level feels to be about regular strength, and I find the flavor to last around 45 minutes on average!  It's a very well rounded, traditional flavored snus product.  And, as I mentioned before, one of the best products GN Tobacco makes in my opinion!
Posted by Chad Jones at 11:33 PM