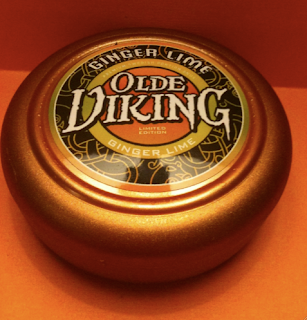 NOTE:  This product has been discontinued and is no longer for sale.  If you want to try a Ginger Lime snus, you can check out Oden's Extreme 79 Ginger Lime.

Okay, I'm starting to feel like the guinea pig of the snus community. Chaini Khaini, then Olde Viking Spearmint, and now Olde Viking Ginger Lime. I used to feel kinda accomplished if I got a review out within the first few days of a product launch, but on ones like this - weeks after product launch, and still little to no reviews, I'm starting to feel like a lab rat. I do think it's cool to get emails saying "I'm not going NEAR that stuff until I read your review," so I really take those emails to heart and thank you, for those who send them, for holding my opinion so high. In the end, as I've said for a while now, everyone's tastes are different - so keep in mind when you read my reviews that you may have a different experience. That being said, let's talk Olde Viking. 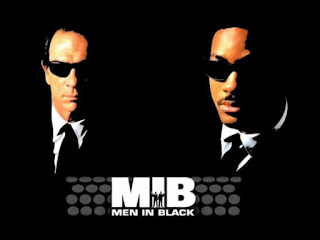 A few things before we get into this snus. First, I'm starting to think Gajane and it's sister/cousin/red-headed stepchild GN Tobacco/Snus AB are pretty secretive and hidden away from the public. Take Swedish Match, V2, Gotland's - some of the major snus companies, even Skruf - they all have websites, people you can contact, and readily available information about the products they sell. When it comes to Gajane in particular, they don't have a website, and still to the date of this writing, I have yet to ever speak with anyone involved with Gajane and their products such as Oden's snus (which I absolutely love, I wish I could say thanks to them for making it) or see a website, contact email, or even phone number. Snus AB/GN Tobacco just gets even weirder. Okay, so Gajane bought Snus AB which used to make the ugly hockey puck can snus, and now operates under the name GN Tobacco....still making ugly hockey puck can snus. (they apparently came with the factory, why waste 'em?) To get more into that story, read Larry Waters article at SnusCENTRAL about the specifics of the buying of the factory and all the details. Okay, so as news about this was coming to light, a mysterious person named Adrian (who never supplied a last name) dropped some details, disappeared, reemerged to announce Ginger Lime, and disappeared again. This is starting to sound like the plot to a bad movie. Or a really funny Will Smith movie that comes to mind. What other details did he disclose? 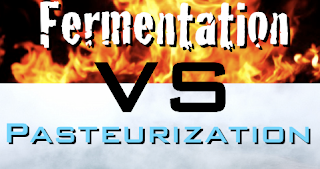 That's the other part I want to discuss before I review this snus. Olde Viking snus is FERMENTED. To bring up SnusCENTRAL again, I'm glad to see that they are the listing this in the product description in their store, I wish others would do the same. "NOTE: Olde Viking Ginger Lime Snus is a FERMENTED tobacco product; not a PASTEURIZED one." Now, why does this matter? Is this even a big deal? Well, yeah! Until proven otherwise, I consider it to be a very big deal. The pasteurization/fermentation issue is what differentiates Swedish Snus from any other tobacco product. It's what makes Swedish Snus as safe as it is (amongst, of course, other regulations and standards). American "dip" is fermented (fire cured) and it is a product known to cause cancer. Swedish Snus is pasteurized, and, well....we know how safe it is. If you want to do a little research, I've compiled tons of articles at Snubie.com, just check out the "Snus & Health" area. So even if I did like any Olde Viking product, this fact keeps me away from it being something I'd use in heavy rotation. As someone once said, "If it's not pasteurized, it's not snus." Which I personally agree with.

I would however like to add that I've read TSNA reports from GN Tobacco (which I can't disclose the full details of), but this snus carries the same level as regular pasteurized Swedish Snus. Still waiting on a long term test though to see if they rise over time. 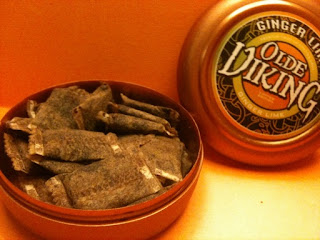 Okay, so how about the snus? Well, start with the can. GN Tobacco must have a billion of these things sitting around because on Northerner recently, maybe still, they were running a buy 5 get 5 free deal. Maybe they're ready to be rid of the ugly hockey puck can too, or the snus isn't selling. Either way, I don't like the can. However, it does look cooler with the metallic orange paint on it than the silver. That helps a little. No catch lid is a downer, in my book. When you open up the can, the aroma is INCREDIBLY strong. It jumps out at you. It's very sweet, I can smell hints of lime, and if I'm really reaching maybe a little ginger. But the lime is the prevalent force in the aroma. The portions are very moist, as you can tell from the picture, I want to say it's more than 55% moisture from using them, because they drip quite quick after putting them in. The portions are comfortable in the lip, a little sting at first but nothing too major. As with the aroma, the taste that comes through first is a bitter lime taste accompanied by a little salt. The longer you keep the portion in, the more bitter the lime gets. To be honest, I don't pick up much ginger. Maybe a speck or two in there, but nothing that would honestly even make me want to put Ginger in the product description, because I really have to search for it to be able to pick it up. The lime flavor is the strongest flavor in this snus, and ginger isn't even present as a hint, it's more like a needle in a haystack. After about 30 minutes it's just too bitter and I have to throw it out.

Final thoughts? Well, usually when I write a review I go through a can or two before I can offer any opinions. To be honest, I went through half a can of this stuff (and that was pushing it) and could not bring myself to do any more. I took one for the team, to say the least. So, as official Guinea Pig of the Snus World, I can say that this snus didn't work for me and isn't something I'd order again, same as the last offering from Olde Viking. Maybe the mysterious Adrian or the Men in Black who run Gajane will reach out with some information or some intel about this stuff, because I don't know who they're testing this on before it goes to market, my opinion is it must be the same people who said Marlboro "snus" and Camel "SNUS" were good.
Posted by Chad Jones at 8:32 PM