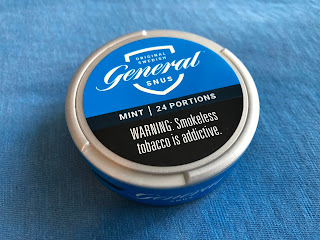 Today, I'm revisiting General Mint (White Portion). And while it's been 8 years since I've reviewed this (in text form), it's still a snus that I use from time to time. The General line recently went through a big redesign, so I figured along with that I'd revisit this snus and do an updated review. General Mint launched in 2010 and was a larger version of General Mini Mint, which was the snus that actually helped me quit smoking. This one has a similar flavor, but isn't as dry, and comes in a larger pouch with more nicotine. To this date, it's still a very popular snus in America, and a great alternative for those who use Camel "SNUS" but want to switch to the real stuff! The flavor description for this product says, "A very popular mint snus - General Mint, with a clear and refreshing flavor of peppermint." This snus comes in a 24 gram can with 24 portions for 1 gram portions. The nicotine content is 8mg/g (0.8%) which, with one gram portions, breaks down to 8mg/portion! 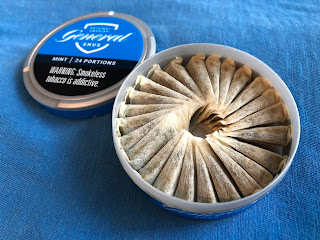 When you open the can, the aroma that you'll notice is a clear, fresh, sweet smell of peppermint. The portions, as you'll notice here, are in the Swedish Match Star Formation. They are wedged to get into that shape, so I suggest fluffing them (roll them around in your fingers) to loosen up the tobacco. When you put a portion in your lip, you'll notice a nice cooling presence, which is common of most mint snus products. The taste is a sweet, fresh taste of peppermint. It is sweeter than other mint products, but I think this helps appeal to American tastes. The nicotine strength feels to be right at the regular strength mark, and the flavor lasts about an hour on average!

If you're an American consumer coming over from American "snus", or someone who likes mint snus, General Mint is definitely worth a try.  It's one of the top mint snus products on the market, and has been for the past 8 years!
Posted by Chad Jones at 9:27 PM