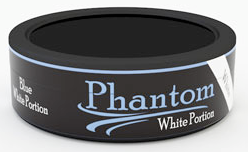 As I enjoy the flavor of Juniper, I looked forward to this being a great product. Anyone who discusses Phantom Blue will speak of the trademark "Windex" smell that you get with this snus. Can't avoid it, it's something you'll hear from a majority of the users. The flavor of the original portion wasn't that great, but the flavor of the los was pretty good.

When I opened this can, I noted the white portions to be very clean, full, and comfortable. The aroma? Well, the Windex smell that I had long since complained about was gone! Stellar. I was hoping this would be resolved in this release. This being a white portion, the flavor isn't going to come on as strong in the beginning, it's going to slowly come in, and the flavor profile of Phantom Blue (White Portion) developed slowly, but built to a rather enjoyable flavor. The flavor of juniper is very present, but very mild, and marries perfectly with a mild salt flavor and a hint of herbs. The portion lasts quite long, I've been able to enjoy one up to an hour and a half, with little drip, and no flavor turn.

I'm very glad V2 released this one, as I enjoy the flavor of juniper, and found the mild presentation of the flavor in this mixed with a mild salt balance and hints of herbs to be a great, balanced flavor profile, and a very enjoyable new white portion to add to V2's impressive lineup.
Posted by Chad Jones at 7:00 AM