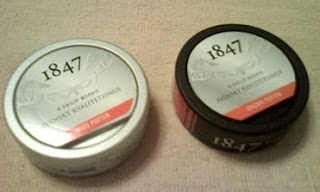 NOTE:  These products have been discontinued and is no longer for sale.

I received a pretty exciting delivery today, and this is one of the things that was in it. The new (and if I may say so) improved version of 1847. Many people have mixed feelings about the redesign - some (myself included) really enjoyed the old cans. They were in the top 5, in my opinion, of snus designs. So when we saw the news about the redesign recently, there were alot of mixed feelings. But I believe this change to be for the best. 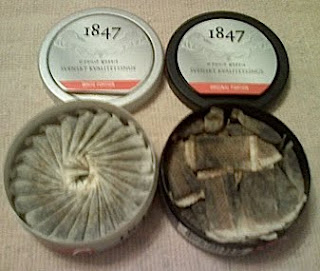 Upon opening the cans, you'll notice the Original Portions are put into the can in no particular formation, however the White Portion is in the familiar Swedish Match star pattern. On 3 September 09 I reviewed the old 1847. I wasn't impressed. The smell? A rank, rotten smell mixed with womens perfume. The taste? A very heavy taste of bergamot, a ton of pepper, and a hint of hominy. (don't ask - I picked it up in every portion I tried.) Okay, so 1847 and I didn't get off on the right foot. But this outing proved to be much different. For those who are new to snus (this article may be being read in a year...), that's the old can to the left. It was a very cool metallic can. But what's inside the can made the can a little less attractive, in my opinion. The redesign, well...it's alot to get used to, but if you look at some of the other redesigns, Swedish Match is taking on a very hip approach to snus. This can, the new Roda, the new Goteborgs Rape, and the new Onyx are simple, but elegant. And I believe that's the approach that was being made with this.

Okay, so on to the snus. Now that 1847 falls under the Swedish Match dome of quality (Domino's reference from the 80's...some of the old timers may remember that one), 1847 is made under the GothiaTek standard. More info about Gothiatek here. This is a standard invented by Swedish Match, and alot of snusers know, Swedish Match products are made with a superior quality. Although we've been informed the recipe hasn't changed, this standard has VASTLY improved the quality of 1847. Starting with the aroma - the heavy perfume smell isn't there....well, not really. Those who have had 1847 before I'm sure will say they can detect it, at first smell I thought I could too, but maybe my nose was trained to pick it up. Upon a second smell, it wasn't as strong, I think my nose was just expecting it and interpreted it as that, but it smelled just like a fresh can of General would. These portions are much more comfortable than the 1847 portions I've tried before. The White Portion closely resembles General White, but is more comfortable because the moisture is a bit higher. The Original Portion closely resembles General Original, and is just about as comfortable. 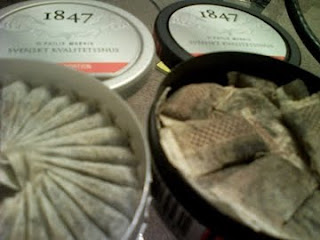 The White Portion is very moist, the Original Portion is semi moist. One thing I noticed about both is the drip isn't as strong or immediate as 1847 was before. The hominy taste is gone. The taste is VERY mildly of bergamot, with small hints of pepper (not as overbearing as before, and a very pleasant salt balance. The tobacco taste is very pure, no doubt due to the standards set forth by Swedish Match with GothiaTek. With the White Portion - the flavor isn't as immediate, but comes in very subtly, the pure tobacco flavor, the notes of pepper, and then salt coming in right behind. With the Original Portion - the flavor comes on right from the get go, very balanced tobacco with notes of pepper, and a a pleasant salt balance. In both products, the flavor is far superior to that of the old 1847, it's a very noticable improvement, and those who have tried it will pick up on it as well. I'm very pleased with the new 1847, and instead of shoving it in the back of the freezer, I'll actually keep this one around. Thumbs up, Swedish Match.
Posted by Chad Jones at 7:11 PM