I recently received some Marlboro Snus in the mail from a friend in Florida, and I've really been looking forward to trying it. Despite the negative reviews, I was once a Phillip Morris cigarette supporter, and I was expecting the same quality I found in their cigarettes to spill over into their snus. I know, there are many articles that would point to the contrary, but I had to check it out for myself. To see what this snus was all about, and what it had to offer. 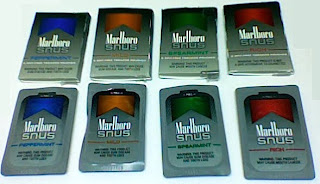 Each portion comes in a small box-like package, each designed in the pattern of Marlboro's cigarette boxes, but these come in a cool dark grey color. The design of these is great, even if the portion seems a little cheap. Something they really captured was the essence of Marlboro with these, because they mesh with the cigarette design well, and in the event of mass sale, I could see them on the shelves next to their big brother. The cost is around $1.00 in most places it is sold. The nicotine content of each is listed as 7.61mg for Rich, 6.33mg for Mild, 6.45mg for Peppermint, and 6.45 for Spearmint. Camel "SNUS" (American) is listed as having 8mg. The TSNA levels are between 1.0 and 1.3. 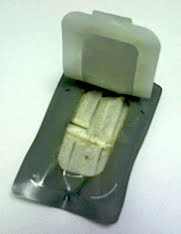 A small, blister like package is inside containing 6 "Spit-Free Tobacco Pouches". This package has a seal on it that is on very firmly, locking in the flavor. Upon opening it, the package will reseal, but not completely - like a snus can would, so after opening, it is advised that you use the portions quickly, so as to avoid loss of flavor or freshness. (but we'll get into that later.) The ones I opened, I returned to a day later and was able to notice a loss in the taste of each one when I was wrapping up this review and doing a revisit. 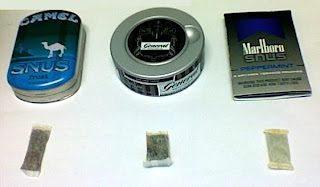 In size comparison, a portion is a little bit smaller than a Camel "SNUS" portion, and a little smaller than a General White portion. The Marlboro portion is very dry (will get into that later), and if you shake it, you can actually hear the tobacco inside shaking. I was surprised, definitely not expecting that. 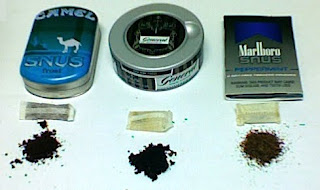 I wanted to open up each one and compare to an American product and a Swedish product, to see what each had to bring to the table. You can immediately notice how dry Marlboro Snus is. It looks exactly like unrolled cigarette tobacco put out on the table. Marlboro Snus has between 11%-12% moisture, while Camel "SNUS" has 33%, and Swedish is between 50%-55% (from reported sources). It was interesting, because in a recent review, I remarked about the quality of Camel "SNUS" and Marlboro Snus seems to be a little below that.

Going into these, I wasn't sure what to expect. First thing I noticed was just how DRY the portion was. I had to run it under water to make it comfortable. The portion was so dry, the ends would almost cut your gums. When I opened it up, I took a step back and smelled again. It smells just like Kahlua. Insanity! Kahlua is one of my favorite additives, and I'm a huge fan of White Russians. So I was excited. Did it taste the same? You bet! I kept a portion in for about 30 minutes, but after that it became so overbearingly sweet that I had to remove. The sweet aftertaste was very strong and lingered for quite a while.

The smell was just like a Spearmint gum. Nothing too exciting. A smooth menthol burn in the beginning, very short lived. And a mellow taste of mint. Not as good as Triumph, or even General Mini Mint, and even in this situation I dare say Camel Frost is better. Only could keep it in for about 20 minutes. Mild aftertaste.

When I opened this one, the Peppermint smell hit like a truck. It smelled very similiar to Klondike or Nordic Ice, that artificial peppermint smell. The taste wasn't too bad, nothing special, but not unbearable. A bland, minty taste. Reminded me alot of Klondike and Nordic Ice's mint varieties. Could only keep it in about 25, 30 minutes. Aftertaste wasn't too pleasant.

Are they seriously using Kahlua to flavor their tobacco? It smelled and tasted of Kahlua. It's weird that I picked that up in two different products, but it's clear as day. I even smelled and took a quick drink of Kahlua to compare, and that's exactly what it tastes like. But Rich is actually more mellow that Mild. Whoever names these should be fired. The taste isn't as sweet - it's still sweet - but not overbearing. I put one in and kept it in for about an hour, it lasted the longest out of all of them. And for some reason, the portions in these were more comfortable, not as dry as the others. I didn't have another package to compare, so this may be a fluke, but this one was actually pretty decent.

In conclusion - is Marlboro Snus terrible? Well, it's not amazing. The two mint varieties dissapointed. However, Rich and Mild did have a great flavor. If Mild wasn't so strongly sweet, I would have enjoyed it more. The flavor of Rich, however was very good, and it's the only one of the four I used the whole package of. I actually plan on picking up another one, for the next night I enjoy my favorite beverage. (NOTE: Hey, Phillip Morris. Let me know if you put Kahlua in this. It's seriously bothering me trying to figure it out.)
Posted by Chad Jones at 9:16 PM