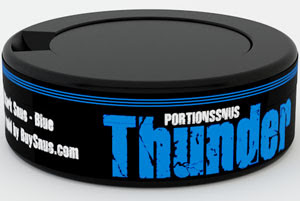 Thunder Blue. A BuySnus.com exclusive. When I first heard about this, I instantly associated it with bad. I don't know why, I just went into it with a bad outlook. Thunder Frosted being my favorite snus, I assumed this was Thunder Frosted+Phantom Blue. Now, Thunder Frosted is great, but I assumed adding some Phantom Blue to the mix would be a disaster. I ordered anyone. After all, I had to try it, Blue is my favorite color - and I'd love to have a snus with "Blue" in the name that I actually enjoyed. Terrible reason to buy something, but it gave me a reason to buy it.

When it arrived today, I'll be honest, I was quite excited. I was really hoping this would be a great new product. Sadly to say, it's not what I was hoping for. This snus is like a high nicotine Phantom Blue. The only part that resembles the Thunder line I know and love is the name. This is like a supercharged Phantom Blue. Upon opening the can, there it was. That wonderful Windex smell (sarcasm). As soon as it hit me I knew it was a down hill ride. The portion tastes MILDLY (and I want to emphasize that word) of Juniper, and there are small hints of flowery notes in the snus itself, but it tastes like it smells, like cleaning supplies. The only good thing about it is that it has a strong nic hit. That's about it. But for that, I've got other portions I can pop in of brands that I LIKE.

In the end, nothing special about this snus. It's a stronger Phantom Blue. The juniper is stronger, but so is that windex smell and that cleaning supply taste I loathe about the original.  If you like Phantom Blue, you may like this one.  But in the end, it's not one I enjoyed.
Posted by Chad Jones at 7:07 PM