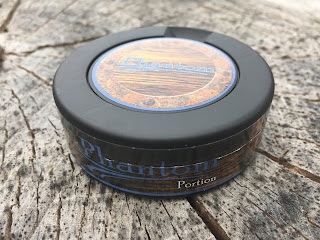 I originally reviewed Phantom Blue Portion on 4 September 2009, and a lot has changed this then. Particularly V2 Tobacco opening their new factory in 2012.  Since much has changed with their product quality, I wanted to go back and revisit some of their older products that I wasn't a fan of when I started snusing.  One product I wasn't a fan of was Phantom Blue Portion.  The first thing that is apparent about the change is the can design.  The can used to be a flat black can and now it has a wooden theme with the labeling.  This is common across the entire Phantom Snus line. 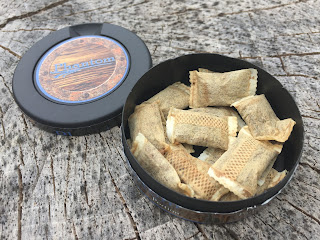 Opening up the can, however, I noticed one thing that has remained the same. An aroma comes through when you open the can that smells very close to Windex. That Snus Guy from SnusCENTRAL noticed it in his review. My friend Dr. Snus noticed it and made a video trying to clean a window with Thunder Blue, which coincidentally didn't go too well.  One thing that has improved is the portion quality.  They're much more consistent and have a much higher amount of tobacco than they used to.  The flavor seems to have improved as well.  There's a light taste of juniper mixed with a tart flavor of lemon and a little floral quality in the background.  There's also a mild tobacco flavor that develops the longer you have the portion in.  This still isn't a snus I would buy or use regularly, but for those who want a juniper snus and want to save a few bucks, give it a try.  This one seems to be a love/hate snus, so you never know if you'll like it until you try it.
Posted by Chad Jones at 6:51 AM