Now, this can be confusing. I'm going to break this down. General Mini Mint was once called CatchDry Peppermint. It was in a 6g portion. That was later changed to General Dry Mini Mint (also a 6g portion), and geared specifically towards a US crowd. Now comes The 2nd in the Catch Collection line, Catch Collection Fresh//Peppermint, which is available in a 10g portion. I thought originally that these would be similiar, but they are quite different in many ways. I have several pictures below to show you the differences, along with the three different product cans.

As I wrote before, General Mini Mint is the "Camel Frost Killer". Mini Mint was made specifically for the US market. It has a mint flavor, and a subtle tobacco flavor, as well - which Camel Frost does not. I do love General Mini Mint, but it doesn't have the full Swedish Flavor. Most Swedish Snus products have a slightly salty taste (ok...some have a very salty taste) which brings out the flavor of the snus. General Mini Mint does not have this. It is a great snus, but many people don't like the sweetness of it and long for a more authentic Swedish Snus with a mint flavor. Enter Catch Collection Fresh//Peppermint. This snus is stronger, and the mint flavor isn't as overpowering as the General Mini Mint. There is also a slight salt taste, which brings out the "fresh" flavor of the Mint in the snus. It has a great taste.

Also, the portion. Is thicker than General Mini Mint, and also looks a little fresher. The portion is soft, and very comfortable. Upon opening the cans, the Catch product has a great mint smell mixed with a hint of that Swedish Snus smell we've come to know and love. General Mini Mint is lacking in this area, it just has a minty smell. Overall, this is a great snus. I find myself saying the same thing I said about Catch Collection Chill//Mint Vanilla, I wish this one would stay around, but alas, it is a limited edition item. Those of you looking for a more "Swedish" mint snus, look no further, as I believe this will fit the bill. IF you like minis. I find myself pleased with this one, and although I still believe General Mini Mint is the best transitional snus from Camel Frost to Swedish Snus, this is an excellent one to try immediately after that, as it would begin to bridge the gap between Mini Mint and more Swedish Flavored Snus. 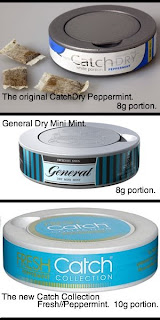 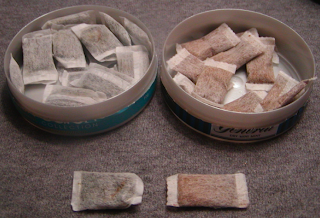