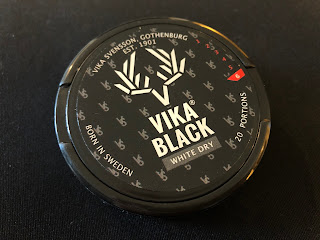 Vika is a new line of snus and nicotine pouches I recently discovered on Snus24.com.  From what I can tell, the company in Sweden that makes them is known as Vika Svensson.  On their website, I read that she was born in Stockholm in 1879.  She got an engineering degree from the University of Sweden.  In 1911, she opened a coffee house in Gothenburg where lots of rich and famous people met.  She sold snus to her clientele there, where she earned the nickname "Snus-Vika".  I'm assuming this product line is made in her honor.  This one is a snus product, and the flavor description says, "A delicate tobacco mixture with best tobacco from Africa and Europe with a hint of bergamotte as well a nice menthol aroma".  Each can weighs 13g, and has 20 portions, for 0.65g portions.  The nicotine content is 28mg/g (2.8%), or 18.2mg/portion. 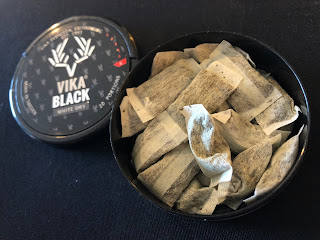 When I opened the can, the first thing I noticed was a lightly sweet aroma of mint.  Right behind it was an earthy tobacco presence, along with a faint touch of bergamot.  It's very interesting smelling.  It has mint in it, but it doesn't smell like it's solely a mint snus.  The portions are pretty soft for a white dry, but are going to be a little dryer to the touch.  They are comfortable in the lip, and come with a light cooling presence.  In terms of the flavor, there is a subtle minty presence and a light citrusy character.  The tobacco flavor is milder, and in the background, but still detectable.  It has an interesting balance of the three different components.  The nicotine level feels to be around the extra strong level, and the flavor lasts about an hour on average, sometimes more!
Rating and Final Thoughts
So, this one was a conflicting one for me; I'm honestly not sure how I feel about it.  The taste is unique, which is why it ended up at 3.25/5.  By rating, it's above average.  But I'm not sure who would enjoy this one - citrus snus lovers, or mint snus lovers.  It has a little bit of everything.  It is certainly different from anything else on the market, which is one reason I enjoyed it.  If you like trying out new things, I'd suggest giving this one a go.  Mainly because it's different.  In the end, I think it'll be mint lovers who enjoy this one the most.