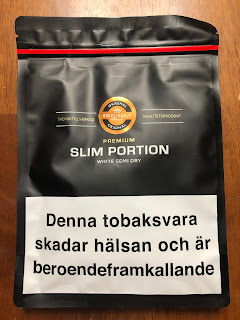 Today, we're going to be talking about another product from SnusRoom.com:  SwedSnus Premium Original 300 (White Semi-Dry Portion).  SnusRoom.com is a new e-store that sells the bulk snus / DIY snus to the US.  I've seen SwedSnus for years on Snusbolaget, so it's nice that we finally have access to it!  I've reviewed some other of their products already:  Premium Original 300 (Large Portion), Premium Special 1000 (Large Portion), Premium Spacemint 300 (Large Portion), and their Premium Express Loose.  This is a portion bag that contains 300 portions.  Their products are a great way to save money, because this bag cost only $26.90.  According to their website, that yields 15 cans, at around $1.79 a can.  You can't beat that price!  Also, it's a great way to save the earth, because you're not throwing away a bunch of cans.  You can simply buy one of their refill cans, or, hint hint, an awesome Snubie Can.  In this review, I'm using their "Don't Touch My Snus" can, because it's got a cool design on it.  When it comes to this snus, their flavor description says, "Classic tobacco with bergamot oil, natural Rose oil and mild tone of smokiness." 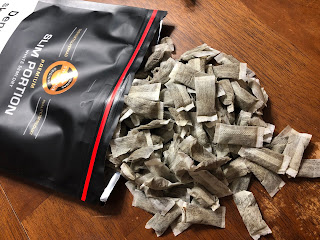 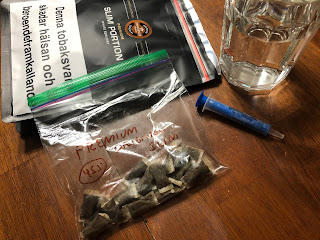 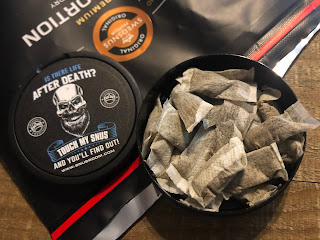 SwedSnus Premium Original 300: Slim White Semi-Dry Portion
When you open the can, a mild tobacco and pepper aroma greets you.  There's a gentle bergamot character, along with light floral notes.  The pouches are slim, moderately soft, and pretty comfortable under the lip.  They are dryer than the average white portion, but not super dry.  In terms of flavor, I pick up bergamot and pepper right up front.  Behind that is a nice base tobacco flavor along with sweet floral notes.  The nicotine feels about regular strength, and the flavor lasts about an hour on average! 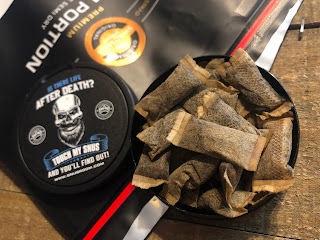 SwedSnus Premium Original 300: Slim Original Portion
I think these turned out pretty nice!  The 45% moisture amount was right on the money, and I'm quite pleased with it.  In the aroma, I pick up a present, robust smell of tobacco.  There's a hint of pepper, a tart bergamot presence, a mild smoky character, and gentle floral notes.  The portions are slim, moist and quite comfortable!  They also have a quick flavor release.  In terms of the flavor, I pick up a rich mix of tobacco and bergamot.  There are lightly sweet floral notes in the background, and a mild smoky character.  The nicotine feels about regular strength, and the flavor seems to kick around for about 45 minutes on average.
Rating and Final Thoughts
I liked the moistened version more, so I rated it at 3.75 out of 5.  The white semi-dry version rated in at 3.67 out of 5.  This one has a pretty nice, traditional flavor, tweaked with some floral notes.  If you're someone who likes traditional snus flavor and wants to save a few bucks, you can't go wrong with these SwedSnus products.
How To Buy:
If you want to know where to get this, and more, SwedSnus products, head over to SnusRoom.com.  If you use the SNUS15 code, you get 15% off your order.  And, all orders over $49 USD ship free.  So, it's a great way to save some money!