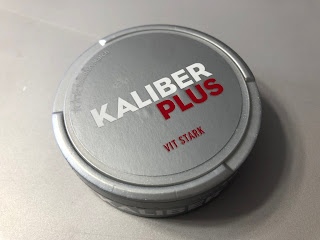 Kaliber has recently gone through yet another redesign, so I figured it was time to do a new review of this product.  In case you aren't familiar, this product was originally known as Mustang Snus when it launched in 2015.  In 2017, it was discontinued, and relaunched as Kaliber+.  The Kaliber+ line may not be talked about much, but it's a pretty solid product!  When it comes to this snus, the flavor description says, "Light and spicy tobacco character with clear hints of bergamot and tea, as well as a hint of rose and cardamom."  Each can weighs 18g, and has 20 portions, for 0.9g portions.  The nicotine strength is 13mg/g (1.3%), or 11.7mg/portion. 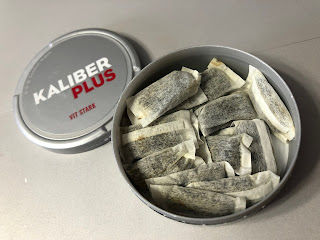 When you open the can you'll notice the portions look like your regular white portion.  The portion material itself is soft to the touch and feels comfortable in the lip.  The aroma that comes through is mild tobacco, a light touch of citrus, and a little pepper.  As far as the flavor goes, it starts with a mild tobacco character.  The longer you have the portion in the more you'll notice the citrus flavor develop and a touch of pepper in the background.  There is a light tea-like presence to this snus, as well.  I don't detect any rose or cardamom in the flavor, however.  I was really hoping to encounter that, but I didn't notice it. If I had to compare it to something, I would say it's close to General White Portion, but the citrus and pepper flavors are more mild.  The flavor lasts quite a while, I've had these in for up to an hour and a half.  The nicotine strength isn't too strong.  Like the original portion, it's 14mg/g or 12.6mg/portion.  It feels closer to a strong than an extra strong and isn't going to knock you out by any means!
Rating and Final Thoughts
Kaliber+ White is a pretty decent snus for this price.  I rated it at 3.33 out of 5.  Granted, it's not something I'd buy again or probably use myself, but it's a decent snus at a cheap price.  If you're a lover of General Snus and you want something similar at a cheaper price tag, this may be one you're looking for.  It's a lot like General, but a little milder in nature.