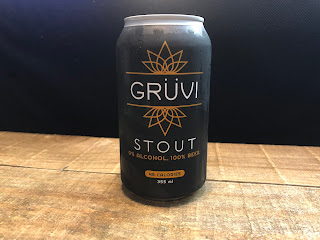 It's time for another non alcoholic beer review!  Today, we're going to be talking about one from Grüvi Brewing!  This is their Stout.  Usually, I'm an IPA or pale ale kinda guy, so stout aren't my usual kind of thing.  But, since I've been getting more into NA beers, I've been trying as many as possible.  When it comes to their description of this beer, it says, "Try our darkest beer yet- the Gruvi Stout! We start off our batch with abbey malt, traditionally known for its mild nuttiness and notes of honey. We then add roasted barley and chocolate malt, and brew our beer into a dry, full bodied, non-alcoholic stout. This dark ale contains hints of toasted malt, along with mild oat and coffee notes."  The ABV is said to be 0.3%, and I couldn't find an IBU for it. 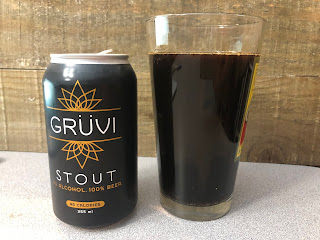 When you pour a glass of it, you'll quickly notice how dark it is.  It's almost pitch black.  It also has a medium amount of carbonation to it.  You can't see from this photo, but right when you pour it there's a pretty good sized, tan/brown colored head.  In the mouth it feels light to medium bodied.  It's not super watery, and has a medium amount of carbonation to it.  In the aroma I pick up tones of coffee, hints of malt, as well as chocolate and tones of nut.  The flavor is a coffee like/roasted type of character.  I pick up hints of malt and barley, along with some earthy tones.  There's also a light hop character to it.  It also reminds me of tobacco, which is interesting.  For a stout, it does have a pretty light finish to it.
Rating and Final Thoughts
So, again, I'm not a big stout drinker, which will reflect in my rating.  I ended up at 2.58/5.  For me, it just wasn't one I could get into.  Stouts are much too heavy for me, and not really a style of beer I prefer.  If you're a stout drinker, you may love it, but at the end of the day it wasn't one I'd go for.