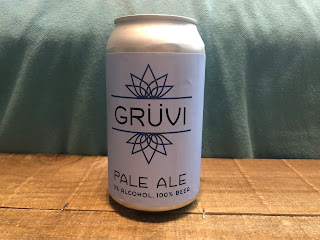 It's time for another non alcoholic beer review!  Today, we're going to be talking about one from Grüvi Brewing!  This is their Pale Ale.  It's nice to be back in my wheelhouse.  Usually, I'm an IPA or pale ale kinda guy, so this is definitely the sort of thing I usually go for.  When it comes to their description of this beer, it says, "This beer is a true take on an English-Style pale ale, which are known for their balanced bitterness from barley and hops. We use Chinook, Cascade and Citra hops to create slight citrus and piney qualities. This earthy and aromatic beer pours a light caramel color with a foamy head. Our pale ale is medium bodied, with a hoppy, bitter bite and slightly sweet endnotes."  The ABV is said to be 0.3%, and I couldn't find an IBU for it. 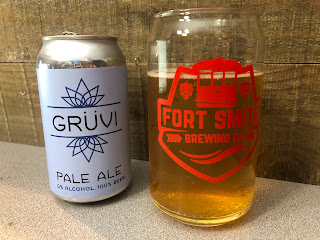 Now that we've done all the fun background stuff that I know you all love, let's get into what you came for - a review of this tasty Grüvi brew.  When you pour it into a glass, it pours a nice, pretty gold color.  There's a light head to it, and a light amount of carbonation.  In the aroma, I pick up malt, a light hoppy character, some grassiness, and a subtle earthiness to it.  In the body, it's light to medium, and the same goes for the carbonation amount.  In the flavor, it's a pretty mild flavor profile.  There's a light hoppiness to it, and a mild malt character.  It's mildly bitter, and lightly grassy in nature.  It has a pretty clean finish to it and is lighter in nature.  It also goes down rather smooth, which is a nice finish to this one.
Rating and Final Thoughts
I rather enjoyed this one, and it earned a higher rating for me, at 3.46 out of 5.  This is a nice, easy drinking kind of beer.  Something I could see myself drinking after a good mow, or a day on the lake.  I've generally been a big fan of Grüvi's beers; they have certainly mastered how to make a flavorful, non-alcoholic beer!