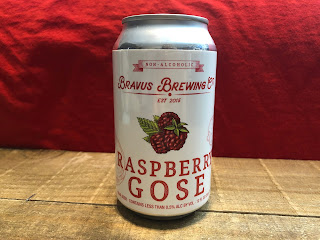 Today, I'm going to be doing another non alcoholic beer review, this one by Bravus Brewing Co out of Newport Beach, California!  This is Bravus' Raspberry Gose.  Gose isn't my usual style of beer; I'm usually an IPA or pale ale kind of guy.  However, since I've started getting more into non alcoholic brews, it's been fun to try out different styles and see what else is out there!  Their description for this one says, "The Bravus Raspberry Gose is a light, easy-drinker which strikes a great balance between sweet and tart. Hints of Raspberry, Lime and Himalayan Salt makes this beer super refreshing."  Bravus beer comes in at <0.5% in terms of ABV.  The IBU I found for this one is 5. 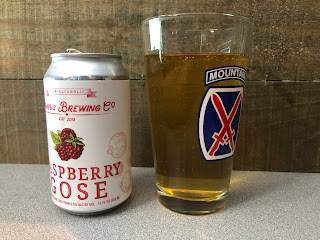 Okay, now that we've talked background, let's get into the fun part and talk about the beer.  When I opened up and poured the beer, I noticed a nice golden color.  The beer has a lighter amount of carbonation in the glass.  In the aroma, I picked up hints of grain, and malt, and a present tone of raspberry.  In the mouth, it has a thin, and light feel to it.  Also, the carbonation feels lighter, along with the mouthfeel.  The flavor was actually pretty good.  I noticed a present raspberry flavor along with a light saltiness.  There's a mild flavor of grain and malt, along with a bread-like quality.  The flavor, in general, is sweet, but sour.  The raspberry is definitely the star of the show.  It finishes out smooth, fruity, and lightly salty.
Rating and Final Thoughts
This one rated a little higher than average for me, coming in at 3.21/5.  Would I drink this beer again?  Probably.  I'm writing this review when it's 29 degrees outside, so it's probably something I'd bring back in the summertime.  It's definitely an easy-drinking summer type of flavor!