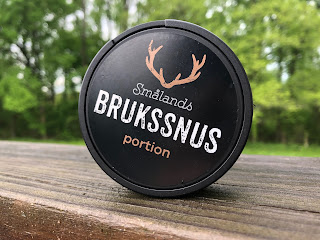 Today, we're going to be reviewing Brukssnus, a product from Skruf! Brukssnus originally launched as Småland's Snus, in the original and white portion format. I've reviewed it several times. First in 2014/2015 when it launched, again in 2017 when it became Brukssnus, and I'm re-reviewing it now because the can has changed slightly; it has gone from a partial catch lid to a full catch lid. So, here we go!  The flavor description for this one says it has a "classic tobacco taste". This snus comes in a 15.2 gram can with 18 portions, or 0.84 gram portions. The nicotine content, according to SnusBolaget.se is 8mg/g or 0.8%, which breaks down to about 6.72mg/portion.  I've seen it listed other places as 10mg/g, so if that were the case it would be 8.4mg/portion.

It's important to note, due to a new Swedish law, this will be going to 20 portions per can.  The can I have isn't 20 portions, but any new cans going out will have 20 portions in each can. 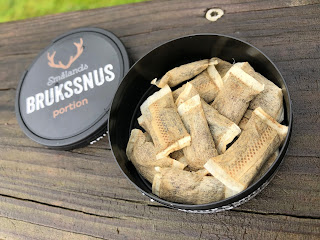 When you open the can, the aroma is a mild, earthy, lightly sweet tobacco smell. It's very raw, very natural. The portions are smaller in size, but still feel comfortable and substantial in the lip. They aren't overly moist, either. The tobacco taste is front and center, and it comes through in a mild, natural way. There's a light sweetness to it, which reminds me of a floral-type presence. However, the flavor is mostly a raw tobacco. The flavor lasts quite a while; due to the less moist portion, I find I can keep these in for up to an hour. The nicotine on this one feels to be about the regular strength level.  As far as this one goes, it's a good budget snus.  Cheaper price, and a solid flavor!
Posted by Chad Jones at 7:29 AM