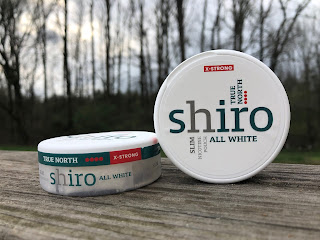 AG Snus has released another new nicotine pouch product in their Shiro line: Shiro True North All White X-Strong! I've reviewed a few Shiro products before, first with Cool Mint Strong and Sweet Mint in July of 2019, and Virginia Classic in January of 2020. The flavor description says it has a "taste of menthol". Shiro comes in a 12g can with 20 portions, for 0.6g portions. What's interesting about this one is that when Shiro Cool Mint launched, I was told it was 20mg/g of nicotine. And that one was just called a strong. This one is listed as an X-Strong, at 12mg/g (1.2%), which is only 7.2mg/portion. 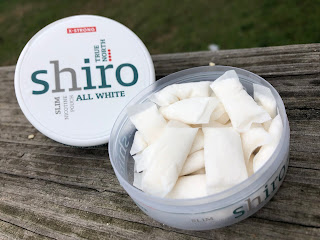 When you open the can, the aroma that greets you is a mild, sweet smell of peppermint with a hint of menthol. The portions are slim, quite soft, and feel great under the lip! Being a mint product, you'll encounter a mild cooling presence when you put one under the lip. The flavor of peppermint is present, but mild, with a light sweetness to it. There's also a light touch of menthol to the flavor as well. As far as the nicotine goes, this stuff is strong. I don't use a lot of really strong stuff, but I felt it almost immediately and could only keep a portion in for about 10 minutes. I'm not sure if it's stronger than 12mg/g, but it feels well above the extra stark level. I can't speak to how long the flavor lasts, since I couldn't keep it in too long.

If you're a nicotine pouch user, and you like really strong nicotine levels, you will probably like this one.  It's much too strong for me, personally.  But mint lovers who want something with a kick, here you go!
Posted by Chad Jones at 12:06 PM