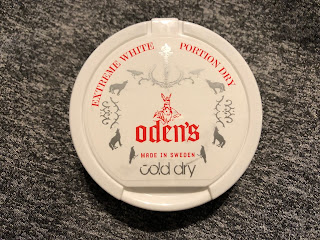 Yes, I know, I've already reviewed this one.  However, due to Swedish law recently passed, snus cans must now contain at least 20 portions, so since it now has more portions, I figured it deserved a new review!  It's gone from 13 portions in the old version, to 20 portions in this new version!  So, it's the same product, but now with more portions in the can!  The flavor description for this one says, "Oden’s Cold Extreme White Dry is a super strong portion with a cooling taste of mint."  Each can weighs 16g and has 20 portions, for 0.8g portions.  The nicotine content is 22mg/g (2.2%),  for 17.6mg/portion. 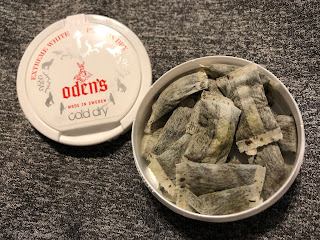 If you've had this before, it's basically the same thing, but with more portions.  When you open the can, the aroma is a sharp, mildly sweet smell of spearmint.  The portions are the white dry format, but are pretty soft to the touch, and comfortable under the lip.  Being a mint product, you'll encounter a mild cooling presence whenever you put one under the lip!  The flavor is a mild, lightly sweet taste of spearmint.  Same as the old Oden's Cold, but in a can with more portions.  The nicotine level feels to be around the extra strong level, and packs a solid kick.  The flavor, on average, lasts between 1-1.5 hours.  A benefit of the white dry format!

I know this snus is incredibly popular, so I imagine fans of this one are going to be happy now that it has more portions!
Posted by Chad Jones at 1:31 PM