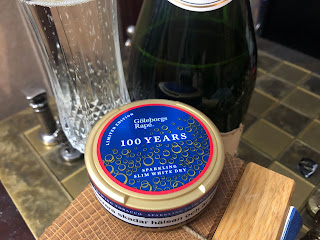 Swedish Match/V2 Tobacco has released a new product with a champagne-inspired flavor: Göteborgs Rapé XRANGE Sparkling (Chew Bags)! This is a new chew product for the EU market. If you're not familiar with chew bags (or Nordic Chew), these are products that are made the same way as snus, but the tobacco is cut instead of ground, and the portion material is a little thicker so it can technically be chewed. These two minor changes make it legal to be sold in the EU where snus is banned. I know, it makes no sense, but that's the way it goes. The champagne flavor is becoming pretty popular, starting with Small Batch 1 in January of 2018, followed by the Lund Edition in July of 2018, then Göteborgs Rapé XRANGE Sparkling in May of 2019. G4 Fizzy, an all white version, came in July of 2019, followed by Zyn Lemon Spritz, a nicotine pouch version, in September of 2019. 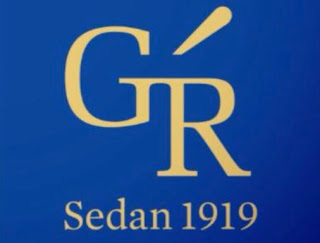 This release celebrates the 100 year anniversary of Göteborgs Rape, and is said to have "a light tobacco character with elements of apple, elderflower as well as notes of citrus and lavender".  Each can weighs 13.2 grams and has 24 portions, for 0.55g each.  The nicotine content is 28mg/g (2.8%), or 15.4mg/portion.  Göteborgs Rapé is a personal favorite of mine, so this year I was more than excited to celebrate its 100 year anniversary/birthday! 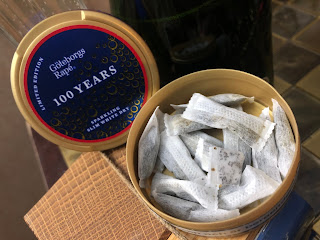 When you open the can, the aroma is a mild, tart citrus aroma with a light floral hint, tones of pepper, and a mild touch of apple. The portions come in the slim white dry format, so they may not be as comfortable at first, but the more moist they get, the more comfortable they get. The flavor is citrus up front, which comes through in a mild tart way. There is a hint of pepper, some lightly sweet floral notes, a mild tobacco character, and a hint of apple. The nicotine feels to be around the extra strong level, and the flavor lasts 1-1.5 hours on average.  I was pretty impressed with this one, and how well it captured the flavor of GR Sparkling XRANGE, but in a chew bag version!  This is said to be a limited edition, so make sure and act on it before its gone!
Posted by Chad Jones at 7:33 AM