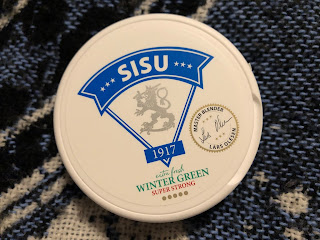 To preface this review, I'm not a big fan of wintergreen, but I'll do my best to remain partial because AG Snus has released their first wintergreen product: SISU 1917 Extra Fresh (Winter Green) Super Strong!  Back in 2017, AG Snus launched SISU Extreme White Dry, and now it appears that SISU is a product line, as it has this one, and a new wintergreen one. This one also says "Lars Olesen: Master Blender" on the can, so it appears as though AG wants to focus on quality with this one.  SISU is apparently a phrase in Finland, according to BuySnus, which stands for "determination and bravery".  So, this is a Swedish Snus, made in Denmark, with a Finnish name.  That is a well traveled product!

The flavor description for SISU Wintergreen says, "Fresh with a clear taste of Wintergreen. 1917 is a wink to Finland's independence proclaimed in 1917. SISU Fresh Wintergreen White portion is one of the latest additions under the SISU brand. The tobacco blend was developed by master mixer Lars Olesen and the snus has a clear wintergreen taste that gives a fresh taste."  Each can is 14g and has 20 portions for 0.7g portions.  The nicotine content  is 20mg/g (2.0%) or 14mg/portion. 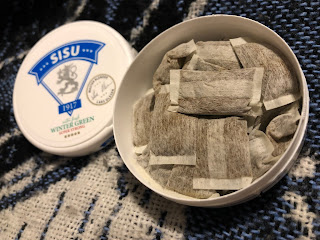 Okay, so this one wasn't that bad. I don't dig wintergreen, but this one wasn't in your face wintergreen, so it's okay in my book. The aroma is a mild wintergreen smell, with a light minty presence in the background. The portions are nice and plump, one thing I love about AG Snus! There is also a nice cooling presence when you put one of these portions under your lip. The wintergreen flavor is pretty mild, and has a light sweetness to it. I also notice a mild hint of mint in the background, and a light tobacco character. It's not that bad! The nicotine strength feels to be firmly at the extra strong level, and the flavor lasts around 1-1.5 hours on average.

Am I going to order this one again?  Probably not.  But if you like wintergreen you may enjoy it.  I didn't find this one to be too bad, and coming from someone who doesn't like wintergreen that has to count for something!
Posted by Chad Jones at 12:16 PM