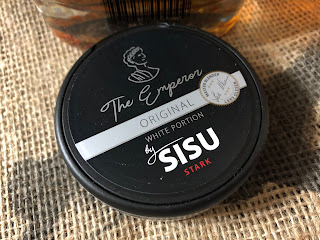 Of all the products I got in a recent order, this is the one that was the most surprising. Back in 2017, AG Snus launched SISU Extreme White Dry, and now it appears that SISU is a product line, as it has this one, and a new wintergreen one. This one also says "Lars Olesen: Master Blender" on the can, so it appears as though AG wants to focus on quality with this one.  SISU is apparently a phrase in Finland, according to BuySnus, which stands for "determination and bravery".  So, this is a Swedish Snus, made in Denmark, with a Finnish name.  That is a well traveled product!  The flavor description for this one says, "Emperor is a reference to Finland's independence from Russia. Traditional snus flavor with bergamot, tobacco, citrus and a slightly smoky taste with whiskey tones.  The tobacco blend created by master blender Lars Olsen."  Each can is 14g and has 20 portions for 0.7g portions.  The nicotine content  is 20mg/g (2.0%) or 14mg/portion. 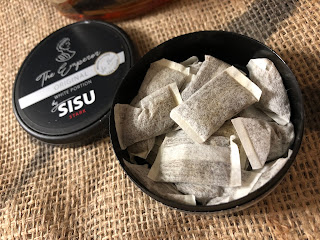 Reading that flavor description, at first it sounded kind of crowded. Usually when a product has too much going on, it can be detractive. But with this one, I was amazed with how well balanced it is. The aroma is a robust tobacco smell, with a light hint of wood and smoke. The portions are nice and plump, one thing I love about AG Snus products! They’re also quite comfortable in the lip. In the flavor profile, the first thing I notice is tobacco, but it’s a mild, gentle tobacco taste. There’s also a mild, clear taste of citrus, a touch of smoke, and a hint of wood. The whiskey flavor isn’t overpowering; honestly, it’s barely there. But it does serve as a nice compliment to the rest of the flavor profile. All this is incredibly well balanced. The nicotine level feels to be between a strong and an extra strong, and the flavor lasts between an hour and 1.5 hours on average.

This product caught me off guard, and I really enjoyed it.  As of the date of this writing, I've only seen it on SnusBolaget.se, but I am hoping eventually stores that ship to the US will have it, as well!
Posted by Chad Jones at 5:15 PM