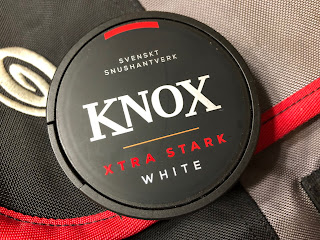 Skruf has released the first extra strong product in the Knox range - Knox Xtra Stark (White Portion)! The Knox line is very popular in Sweden; I heard not too long ago that it was the number two brand behind General. I don't know if that's still the case, but a lot of people really seem to dig Knox due to its quality taste and low price tag. I saw this one recently on SnusBolaget, so I imagine it'll be available on the e-stores that ship to the US soon, as well. The flavor description for this one says, "The latest addition to the Knox White family. The same snuff as Knox White but with higher nicotine potency and the same clear tobacco taste in combination with citrus tones." Each can weighs 19.2g and has 24 portions, for 0.8g portions. The nicotine content is a 4/4, which puts it at the extra strong level; I'm guessing it falls between 17mg/g-19mg/g. 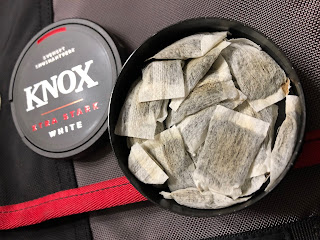 If you've had Knox before, this one tastes like the others, but has more nicotine. I know, spoiler alert, right? The aroma is a slightly sweet smell of citrus with a mild tobacco character. The portions are pretty plump, but a little dryer to the touch than the average white portion. The flavor is a mild, lightly sweet taste of citrus with a floral hint in the background. There's not much pepper in this one, like with General, for example. There's also a mild tobacco character in the background. The nicotine feels to fall between a strong and an extra strong, and I find the flavor lasts a little over an hour on average.  If you like Knox and want a little more nicotine, your prayers have been answered.  If you're looking to save some money and like the traditional flavor profile, this one is a good alternative!
Posted by Chad Jones at 7:01 AM