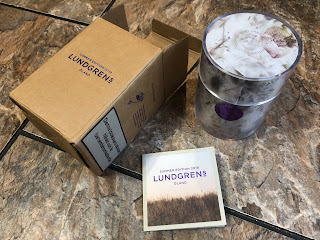 Summer is ending, and we are coming into the fall season, but Fiedler and Lundgren have released a special summer edition Lundgrens product inspired by the Swedish island of Olánd! Meet Lundgrens Öland: Summer 2019! I’ve never been to Öland myself, but when looking around online, the phrase that keeps coming up the most is “island paradise”, so apparently it is quite beautiful. This edition sold out almost immediately on Snusbolaget.se, as only 3000 of these were made. It wasn’t available to the US, so I was very fortunate a friend of mine sent me one as a gift! The past several years, Fiedler and Lundgren have released some pretty neat limited edition products. December 2016 saw Lundgrens Infusion, which had a taste of juniper and ginger. August of 2017 saw another Lundgrens Infusion, this one with a taste of lavender and lemongrass! Starting in 2018, they began releasing products inspired by areas of Sweden. Summer 2018 saw Lundgrens Marstrand, which was inspired by the sea, with a taste of roasehip and heather. Winter of 2018 saw Lundgrens Kebnekaise, inspired by a tall mountain in Sweden, which had a taste of cloudberry. And now we have Lundgrens Öland! To describe it further, I’ll show you some photos of the side of the box, and then the book that came with it. And of course, my very best Google translation! 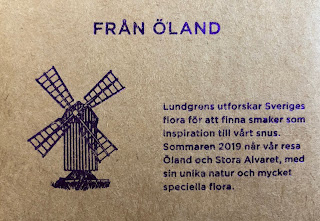 From Öland
Lundgrens explores Sweden's flora to find flavors as inspiration for our snus. In the summer of 2019 our trip will reach Öland and Stora Alvaret, with its unique nature and very special flora.” Stora Alvaret is an alvar which is a big, expansive area on a limestone plane. Stora Alvaret is around 260 sq km, which makes it the largest expanse in Europe. Stora Alvaret actually means "The Great Alvar". It covers 1/4 of the land area on Öland. Carl Linnaeus, a Swedish botanist, once noted "It is noteworthy how some plants are able to thrive on the driest and most barren places of the alvar. 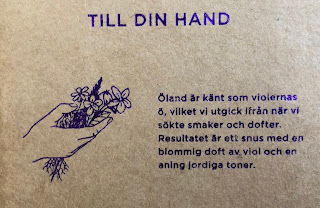 To your hand
Öland is known as the "island of violet", which we assumed when we were looking for flavors and aromas. The result is a snus with a floral scent of violet and slightly earthy tones. 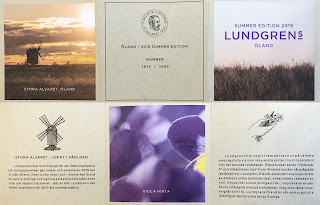 The bottom left side says, "Stora Alvaret - unique in the world: Lundgren's journey around Sweden to find inspiration for snus experiences continues and in the summer of 2019 we have reached Öland. Its unique nature and, in particular, Stora Alvaret's desolate and beautiful limestone shed are reminiscent of nothing else - this is where Lundgrens has found inspiration for the 2019 summer edition.” The bottom right side says, “Lundgrens has developed this snus in the same caring way as our other varieties, with inspiration from the Swedish landscape. Öland is usually called "the island of violas" and together with Stora Alvaret's very distinctive landscape, Lundgren's Öland flavoring has been inspired by Alvaret's unique flower hybrids, which is evident in the taste of violet. The snus also has earthy notes, inspired by the thin soil layer on top of the limestone, along with light tones of grass and wood. Lundgren's island is our caring interpretation of this unique part of Sweden.” 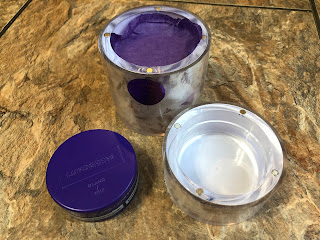 Inside the box is a little vessel which has a beautiful floral pattern on it. The top is magnetically sealed. This year’s edition comes with a blueish-purple can. It’s also a hard can, which means you can save it and reuse it later if you choose!  The flavor description for this one says, “Lundgren's Öland flavoring has been inspired by Alvaret's unique flower hybrids, which is evident in the taste of violet. The snus also has earthy notes, inspired by the thin soil layer on top of the limestone, along with light tones of grass and wood.” The can weighs 20.4g and has 24 portions, for 0.86g portions. The nicotine content is 10mg/g (1.0%) or 8.6mg/portion. 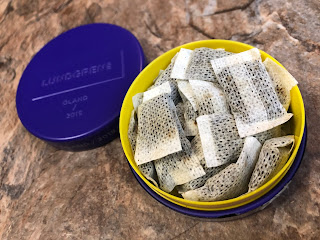 When you open the can, the aroma is very floral. It's like walking through a field of violet. There also seems to be a little tobacco in the background. The portions are the perforated type, which means they have the little holes in them for a quick release of flavor! In the flavor profile, I notice mostly violet. It's floral, and mildly sweet in nature. There's also a little herbal hint in there, and a light tobacco character in the background. It's pretty well balanced, and tasty! The nicotine feels to be around the regular strength level, and I find the flavor lasts about an hour, sometimes a little more!  With the perforated pouch, you get a quick flavor release, and with the white portion material you also get a long lasting flavor.  It's a win/win.

I enjoyed the flavor of this one.  It's very summer-y to me, and one I'm going to take with me on my upcoming trip to the lake next weekend!  It sold out quickly, so next year make sure and grab it when it pops up for sale, if available to your country!  This one wasn't available to the US, so here's to hoping that the next one will be.
Posted by Chad Jones at 8:24 AM