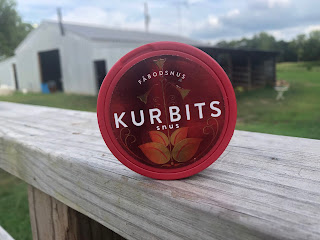 Kurbits Snus is a new snus manufacturer in Sweden that resulted in the meeting of an avid snus fan and an innovative entrepreneur. They recently broke onto the scene by debuting four products: Morgondagg (Vit), Fäbodsnus (Vit), Soldat (Vit), and Soldat: Vinter (Vit). Each has a unique flavor that is unlike anything else on the market. After getting to know them the past week, I've learned this about this new company: they want to do things differently. And that's something the snus market has sorely needed for many years now. Products that aren't the usual super strong/mint products we see so many of.  Currently, I've only seen their products for sale in Sweden, and only on SnusBolaget, but hopefully before too long people outside of Sweden will get to try them!

When it comes to Fäbodsnus, the flavor description I was given for this one says the flavor is "With a taste of the old times". Snusbolaget describes it by saying: "A taste of rustic tobacco that meets sun warmed flower meadows, with clear hints of sweetness and vanilla."  Each can weighs 18g and has 20 portions, for 0.9g portions.  The nicotine content of this one is 14mg/g (1.4%), which breaks down to 12.6mg/portion. 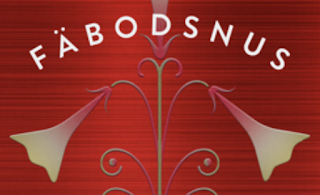 Kurbits Snus gave me an extended description of this product I wanted to share, because it says a lot about how they approach snus, that it isn't just the flavor, it's the experience: "In the old farmer society it was necessary to keep the farm animals away from the farm during the summer so the more easy farmed land could be kept for growing crops at the farm. This made the ”Fäbodvallar”, very common in northern and middle Sweden. Of course this was common in Dalarna, the inspiration for Kurbits Snus. To keep animals on fäbodvallar, there are traditions when it comes to flavours, aromas and food culture. To keep the fresh food usable all around the year, a lot of the products was made out on the fäbodvall with cheeses, butter and ”messmör” that was made on site. To work out on the fäbodvall was a job for women mainly and was a help for the farm to make it all around the year with cold weather and harsh winters. The culture from fäbodvallar has had a great impact in creating the Swedish cultural base." 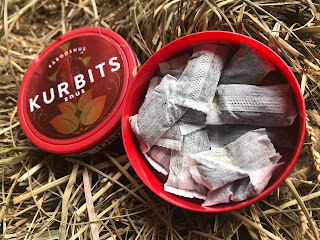 I was really excited for this one, since I just bought a farm myself and have been enjoying farm life. This one is probably one of the most unique snus products I’ve had, in recent memory. The smell of tobacco is present; it is aromatic, it is musky, it is slightly sweet. I also notice a little presence of hay, and a light floral note. The portions are a little dryer than the average white portion, but they aren’t uncomfortable, and they do have a quick release of flavor. In the taste, I notice a mild, natural vanilla up front. Behind it is a musky, full bodied tobacco taste. It almost reminds me of good cigar tobacco. There’s also a light herbal presence in the background that I can’t put my finger on. The nicotine strength feels to be a hair above regular strength; not too strong, not too weak. I find the flavor, on average, lasts up to about an hour.

This one grew on my over time.  At first, I was kind of iffy on it.  But after using 2-3 portions, I really came to appreciate the complexity of the flavor.  It's a really well done snus, and something I could see as a good all day, summer snus.  If this is what Kurbits Snus is launching with, I can't wait to see what they release after years of being in business.