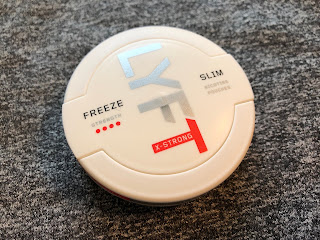 Fiedler and Lundgren have launched a few new Lyft products, and today we're talking about one of them: Lyft Berry Frost. This is a nicotine pouch product, meaning it contains nicotine, but no tobacco!  While these products aren't for me, they are good for those who may want to quit tobacco, but not nicotine.  This product is similar to the Epok Freeze (X-Strong) Snus product I reviewed a few months ago. The flavor description for this one says the flavor is a "peppermint and menthol blend". This product comes in a 16.8 gram can with 24 portions for 0.7 gram portions. The nicotine content is 16mg/g (1.6%), which breaks down to 11.2mg/portion. 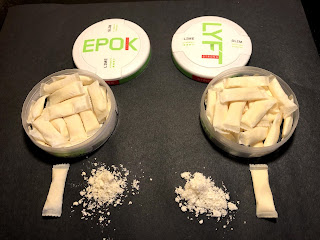 I won't go too in depth on the differences between Epok and Lyft, but if you want to know more, I wrote an article about it, and I also did a video about it. But here's a photo just so you can see it real quick. You'll notice the cans look similar except the name, the portions look similar, and even the material inside the pouch looks similar. The way the pouches feel in the lip, the way the nicotine releases, and even the flavors are all very similar as well. So if you like Epok, you'll probably also really like Lyft. 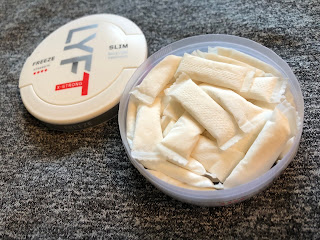 If you've had the Epok Freeze X-Strong before, this one is virtually identical. This one has a sharp, present smell of peppermint with just a hint of menthol. The portions are slim, soft, and pretty comfortable in the lip! There's also a cooling presence you'll feel in the lip when you put a portion in, and a mild burn! The flavor is a predominant peppermint flavor with a hint of menthol in the background. It isn't overly sweet, either. There is a light sweetness to it, but it's not overdone. The nicotine on this one kicks in pretty quickly, and has a really strong kick at that! It feels firmly at the extra strong level. The flavor, on average, lasts about 45 minutes to an hour.

If you're into nicotine pouches, especially those with a mint flavor, and want some with a really, really strong kick, you may really enjoy these.
Posted by Chad Jones at 6:38 PM