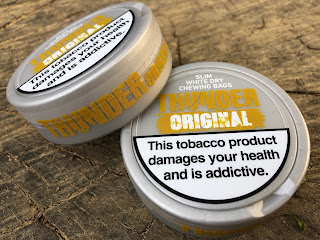 V2 Tobacco has launched a new chew bag product that isn't a mint flavor! I had to joke, because it seems like most new products these days are mint releases. This is one with an original flavor in the popular slim white dry format. If it sounds familiar, I reviewed Thunder Original (Slim White Dry) Snus back in 2016, but it's been discontinued. If you're new to "chew bags" or "Nordic Chew", I did a video on it which explains it a little better. It's made the same way as snus, but it has cut tobacco instead of ground tobacco, and the portion is a little thicker so you can technically chew it if you want. But, I never do. The flavor description for this product says, "Thunder Original Slim White Dry Chew Bags has a traditional tobacco flavor with hints of bergamot." It comes in a 13.2 gram can with 24 portions for 0.55 gram portions. The nicotine content is 16mg/g (1.6%) or 8.8mg/portion. 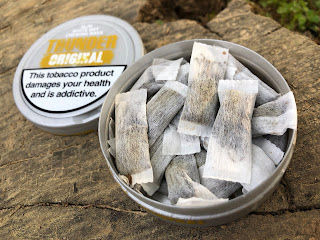 Going into this one, I was curious how it would compare to the snus version I reviewed back in 2016. It is, from what I can recall, very similar! The aroma is a light, mellow, earthy tobacco smell. The portions, being the slim white dry format, are dryer than your average white portion. They aren't uncomfortable by any means, but they aren't as soft as your regular white portion until they get a little more moist in the lip. The flavor is predominantly tobacco, but it is a mild, gentle tobacco taste. It's very light in nature. It gets a little more present as the portion gets more moist, but not too bold. The nicotine, though only 8.8mg/portion, packs quite a kick; it feels firmly at the extra strong level! The flavor, on average, lasts up to about 1.5 hours, which is a benefit of the white dry format!

If you're looking for a chew bag with a tobacco centric taste, this would be one to check out.  There aren't many of them on the market, so this may be right up your alley!
Posted by Chad Jones at 4:20 PM