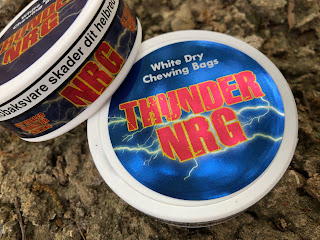 I've seen these products for sale on Northerner.com for a while now, but I haven't got around to reviewing them just yet. I've had some requests lately to do a review of this product, so today we're going to talk about Thunder NRG (White Dry) chew bags! I reviewed the snus version of this product back in 2017, so it's been a little while since I've tasted an NRG product. I was interested to see how close this stuff is to the snus version.  This product is "energy drink" flavored, which you don't see much of.  The only other one made is G3 Wire.  I don't really drink energy drinks, but my fiancé does, and she said this stuff smells just like one.  The flavor description of Thunder NRG White Dry Chew Bags says, "Thunder NRG White Dry Chew Bags has a refreshing taste of energy drink underlined by the explosive amount of nicotine".  It comes in a 13.2 gram can with 24 portions for 0.55 gram portions.  The nicotine content is 42mg/g (4.2%) which breaks down to 23.1mg/portion.

If you aren't familiar with chew bags, they're products that are made basically the same way as snus, except two minor differences.  The tobacco is cut instead of ground, and the portion material is a little thicker so they can be chewed if you want.  I never do, I just put them in my upper lip and use them like snus.  For more in depth info on chew bags, check out this video I did. 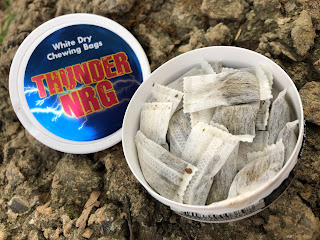 For comparative purposes, this one seems pretty identical to the snus version I had in 2017. The aroma is that familiar energy drink smell - tangy, tart, and a little spicy. The portions, or chew bags, are the white dry type, which means they aren't as comfortable at first, but they get more comfortable as they get more moist in the upper lip. They also have a mild burn when you put one in. The flavor is, well, energy drink flavored. It's tart, kind of like a tangy berry flavor. It has a little spice to it, as well.  It reminds me most closely of Red Bull. The nicotine hits pretty quick, and is actually quite strong.  It feels well above the extra strong level.  The flavor, on average, lasts up to the 1.5 hour mark, which is common of the white dry category.

If you like energy drinks and want that flavor in a chew bag product, this may be something that is right up your alley!
Posted by Chad Jones at 5:10 PM