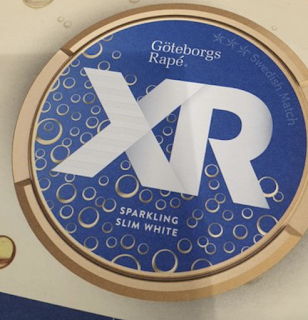 To celebrate the 100 year anniversary of Göteborgs Rapé, Swedish Match is set to release Göteborgs Rapé XRANGE Sparkling: Slim White. This is neat, because it's the first "limited edition" product to be released in the XRANGE series. Pressbyrån will sell it for two weeks, then it will go on sale to other stores from there. I'm not sure if it will be available to e-stores that ship to the US or not, but hopefully it will! This is what the press release that went to Pressbyrån says: "As Göteborgs Rapé celebrates 100 years Göteborgs Rapé Sparkling is launched. It has a light tobacco character with hints of apple, elderberry and slight citrus and lavender. A taste that's previosly shown to be very appreciated."  It looks to be champagne inspired, so I imagine it will be similar to Small Batch 1 (Champagne) or the Lund Edition (White Portion).    I'm looking forward to giving this one a try!