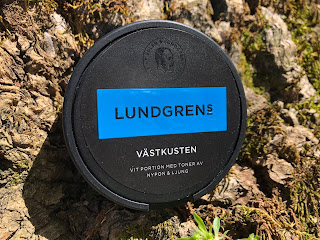 Lundgrens Västkusten is a semi-new product from Fiedler and Lundgren. I say "semi-new" because it's basically the same thing as Lundgren's Marstrand, which was a limited edition product I reviewed back in 2018. Västkusten means "west coast", so this product is one that corresponds with that region of Sweden. Marstrand is off the west coast of Sweden, which makes sense given that this one has the same flavor.  The flavor description for this product says, "With taste of the west coast nature:  Lundgren's Västkusten has a flavor that is inspired by the west coast's cliffs and vegetation found there.  The flavor is reminiscent of wild rose and citrus, together with a tobacco tone.  It also has earthy and floral background tones from heather contribute to the flavor."  Like the other Lundgrens products, it comes in a 21.6 gram can with 24 portions for 0.9 gram portions.  The nicotine content is 10mg/g (1.0%), or 9mg/portion. 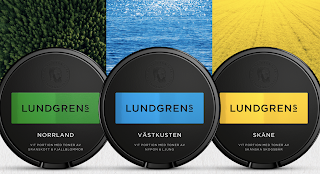 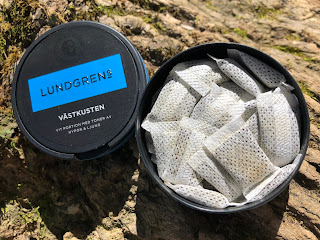 This one will be an easy one to review, as it's the same as the Lundgrens Marstrand I reviewed last year. Even though this one isn't being marketed as "sea inspired" like Marstrand was, this one still reminds me of the sea. There is a present, lightly sweet smell of rose, along with a light herbal presence and a mild tobacco character. The portions come in the perforated format, which means they are like regular white portions but with little holes in them. With this product you'll get the long lasting taste of a white portion, but with the perforated pouches you'll also get a quicker flavor release! In the flavor profile, the rose comes through clearly and has a lightly sweet nature to it. There's a mild herbal presence in the background which I suspect is from the heather. There's also a nice salt character, and a gentle tobacco flavor as well. The nicotine strength feels to be at the regular strength level, and I find the flavor lasts 45 minutes to an hour on average.

This product has done the unthinkable:  it dethroned Lundgrens Skåne Vit and is now my favorite Lundgrens product.  I will be ordering more of this in the future.  As of right now it's a SnusBolaget.se exclusive, but for those in the US it will be available for sale on SnusCENTRAL.com in a few weeks!
Posted by Chad Jones at 5:03 PM