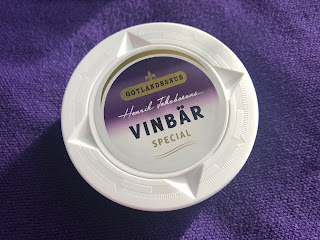 Gotlandssnus is back with another release in their Special Series, and this one with one of my favorite flavors - black currant! The Special Series launched in 2017 with Special Cola in February of 2017. Then, Special Salmiak came in November of 2017. 2018 started off with Special Persika (Peach) in March of 2018. Most recent, we saw Special Blueberry/Vanilla in October of 2018. Gotlandssnus describes this series by saying, "The product has been developed through a collaboration between the founder and the flavorer Henrik Jakobsson and our product manager Joakim Widell. The concept gives us the opportunity to be creative and experiment in our flavoring."

The flavor description for this product says, "Henrik Jakobsson's Special Currant has a distinct tobacco character with the taste of blackcurrants and some sweetness."  This product comes in a 20 gram can with 20 portions for 1 gram portions.  The nicotine strength is 14mg/g (1.4%), which comes out to 14mg/portion! 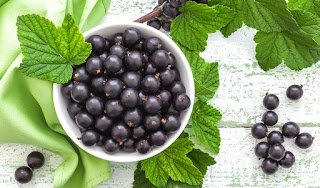 If you're not familiar with blackcurrants, they are absolutely delicious. Back in 2012, Swedish Match released Catch Black Currant Slim White, which was a favorite of mine. The flavor didn't appear until Skruf released Skruf Super White: Cassice in 2018. If you're unfamiliar with black currant - it's a tart berry which is popular in jams and syrups. The flavor of them reminds me of grape, but more earthy and tart. 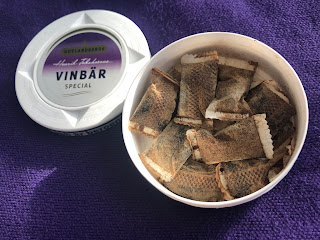 When you open the can, the aroma is earthy and fruity. There's a mix of tobacco presence, and a sweet presence of black currant. The portions are plump, soft, and comfortable in the lip. Their moist, so the flavor releases quickly, but not overly moist, so the flavor also lasts long. The taste is utterly sublime! The black currant flavor is very present, and not artificial tasting. It's natural, tart, but also sweet. The tobacco flavor is in the background, but contributes an earthy component to the flavor. The nicotine strength feels to be a little stronger than the regular strength level, but it isn't too overbearing! The flavor, on average, lasts up to about 50 minutes, which is pretty impressive for an original portion!

In terms of the releases so far in the Gotlandssnus Special Series, this is how I'd rank them.

I really enjoyed the flavor of this one, and I place it right behind their Cola flavor in terms of which one I've liked the most.  If you like fruity snus, this one is a must try!
Posted by Chad Jones at 4:45 PM