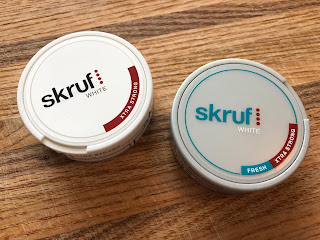 I first reviewed Skruf Skraw Chew Bags back in 2017. My friend Jakob in Denmark contacted me and told me that AG Snus was making the Skruf Chew Bags now instead of Skruf which is who made them last time I reviewed them. So, a special thanks to him for sending these over for me to review. Since they have a new manufacturer, I figured it was time to revisit them.  They're also no longer called Skraw.  They look just like regular Skruf products and have the same design, as well, except these are "chew bags" and not snus.  If you don't know what "chew bags" or "Nordic Chew" is, I'm not going to go too much into it.  But, I've done a video on it if you want to know more.  There's really no difference except these have cut tobacco instead of ground, and you can technically "chew them", even though I never do.  This makes them legal to be sold in the EU.  I know, it makes no sense.  I was told the reason AG Snus is making these is because there's a law now where chew bags can't be exported from Sweden to the EU.  Therefore, manufacturers in Denmark like AG Snus and V2 Tobacco are making chew bags for other companies. 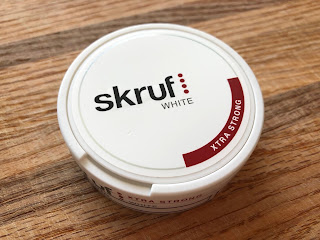 The old flavor description for this product said, "Skruf White Xtra Strong has a full bodied tobacco taste."  This one comes in a 17.6 gram can with 22 portions for 0.8 gram portions.  I'm not sure what the nicotine content is, but being an Xtra Stark it's probably between 16mg/g-17mg/g. 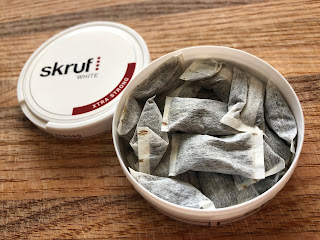 When you open the can, the aroma that greets you is a mild smell of citrus, and a light, gentle sweetness. The portions are soft, plump, and quite comfortable in the lip!  The flavor is very much the traditional snus flavor.  The citrus flavor is mild, and lightly sweet.  There's a gentle, earthy tobacco taste in the background, as well.  I really enjoyed the taste of this one!  For a product made by AG Snus, it tastes pretty close to the version made by Skruf that I had last time. The flavor, on average, lasts about an hour.  It has a strong nicotine kick, and feels firmly at the extra strong level.  This one seem pretty close to the Skruf Skraw Original chew bags I reviewed last time, and AG did a great job with these! 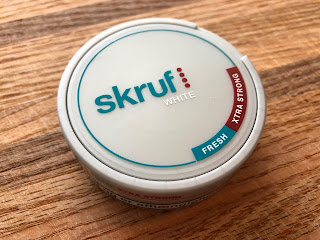 The old flavor description for this product said, "Skruf Fresh White Xtra Strong has a full bodied tobacco taste with a distinct note of mint."  This one comes in a 17.6 gram can with 22 portions for 0.8 gram portions.  I'm not sure what the nicotine content is, but being an Xtra Stark it's probably between 16mg/g-17mg/g. 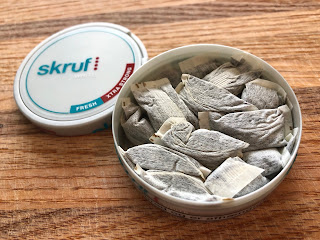 When you open the can, the aroma is a gentle, lightly sweet smell of peppermint. The portions are soft, plump, and feel great in the lip! Being a mint product, you'll encounter a mild cooling presence when you put a portion in the lip. The flavor is a fresh, mild peppermint flavor. It's lightly sweet, and seems to have a touch of menthol in the background.  The flavor is relatively mild, and not overly sweet.  The nicotine kick feels pretty strong, firmly at that extra strong level.  The flavor, on average, lasts up to about an hour!  When comparing this to the old Skruf Skraw Fresh chew bags, I didn't notice too much of a difference, it's pretty close.  AG did a great job carrying over the flavor of the Skruf produced version.

As far as these two products go, I think they're a good option for those who can get chew bags, but can't get snus.  I'm impressed with how well AG Snus carried the old flavor over from when Skruf produced these.  The Original is probably one of the better traditional flavored chew bags on the market, and the Fresh version is a great alternative for those who like the mint flavor profile.
Posted by Chad Jones at 10:30 AM