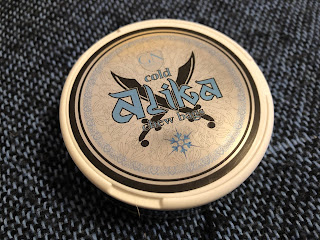 I recently saw on TaxFreeSnus.com that there's a new Alika product, Alika Cold Chew Bags, so I had a friend of mine grab some for me to review. Alika is a line of "Nordic Chew"/chewing tobacco/chew bags from GN Tobacco. Alika is an African tobacco product, much like Makla Ifrikia.  GN Tobacco says it has a faster nicotine release than Swedish Snus, and is based on “toombak” or “shaman”, which is a chewing tobacco product known by North African and Arabic populations going back hundreds of years.  In the past I've reviewed the Alika Chewing Tobacco (Loose) and Alika Chewing Tobacco (Chew Bags), so I've been looking forward to trying this one!

The the flavor description of Alika says, "this product is characteristic for its cold flavour". It comes in an 18 gram can with 13 portions for plump 1.38 gram portions. The can says it contains 35% tobacco and 65% texturing agents. I'm not sure what the nicotine content is, but last Alika product I reviewed was 12mg/g, so this many be the same. 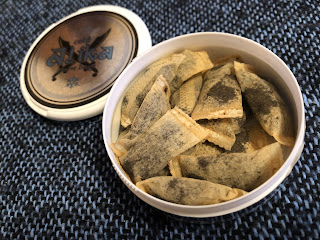 When you open the can you'll notice the aroma is a lot like Oden's Cold Extreme.  The aroma is a present, lightly sweet spearmint aroma.  With this one, however, I notice a mild, earthy tobacco presence in the background as well.  The portions are quite large, and incredibly plump.  They fit great in the lip, and aren't uncomfortable, even though they're bigger than the average snus portion.  When you put a portion in the lip you'll also notice a mild cooling presence, which is common of most mint products.  The taste is a mild, lightly sweet taste of spearmint.  There's also this mellow, earthy tobacco character in the background behind the spearmint.  As far as the nicotine strength goes, it kicks quick, and it kicks hard.  Though it's only 12mg/g, it feel at or above the extra strong level.  The flavor, on average, lasts around 45-55 minutes.

This was a fun product to review and I'm glad I got to try it.  If you like mint and want to try something a little different, check this one out!
Posted by Chad Jones at 10:30 AM