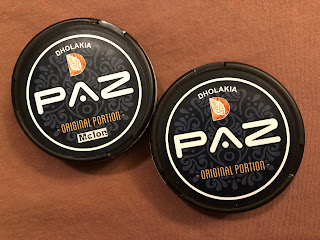 Dholakia Tobacco, a nasal snuff manufacturer in India, is starting to diversity their product line. Paz is a new line from them that comes in both snus and nicotine pouches! Tomorrow I will be reviewing their nicotine pouch products, but today we're going to be talking about their snus products! I was really excited to try these because Dholakia makes some great nasal snuff, including a personal favorite of mine - Swiss Chocolate.  I was also excited to try this because I was told the tobacco comes entirely from India!  When I asked them about the name, they told me Paz means "peace" in Spanish, because snusers are engaged in fights around the world for the right to use snus. They also told me in Hebrew it means "golden", for the golden age they are moving towards where snus can help millions of people quit smoking. 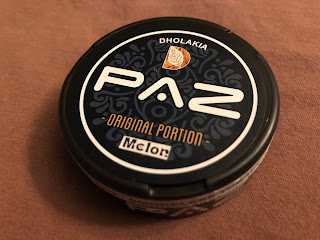 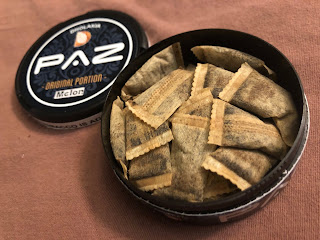 Paz Melon has a present smell of melon which reminds me of a mix of honeydew and cantaloupe. It’s not overly sweet, and there’s a mild tobacco smell behind it. The portions are soft, and comfortable in the lip. They’re moist, but not overly moist. The flavor is a present flavor of melon, but it isn’t too powerful and not overly sweet. There’s also a mild tobacco character in the background and a little spice. The nicotine kick is strong, but it’s not overbearing or too much. The flavor, on average, lasts about 45 minutes.  It's a pretty unique flavor in that the melon taste is present, but not overly sweet, and you can taste the tobacco as well! 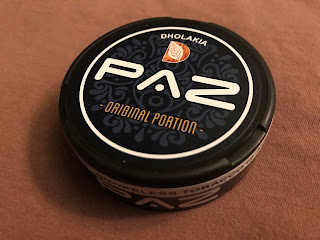 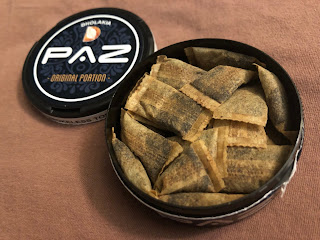 When you open the can, the aroma is a robust, present smell of tobacco along with a hint of citrus. There’s also some spice, and a peppery smell. The portions are soft, and quite moist! The flavor is rather unique. It’s very much the traditional snus flavor, but different. The tobacco flavor is very present, and has a nice spiciness to it. The citrus serves as a compliment to that flavor, and there’s a nice peppery taste in the background. The nicotine has a strong kick, but it’s not overbearing or anything. The flavor, on average, lasts about 45 minutes.  It's really good stuff, and I love how present and spicy the tobacco flavor is.

I enjoyed both of these products, but the original flavor was probably my favorite.  It's very unique and something I'd definitely order again!  I don't think these products are for sale yet, nor do I know who will be selling them, but if you can find them they're both worth a try!
Posted by Chad Jones at 10:00 AM