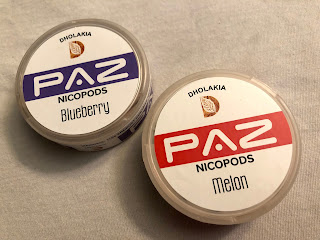 Dholakia Tobacco, a nasal snuff manufacturer in India, is starting to diversity their product line. Paz is a new line from them that comes in Nicopods (Nicotine Pouches) and yes, even snus! Yesterday I reviewed their snus products, so today we're going to be talking about their Nicopod products! Paz Nicopods are products that contain nicotine, but no tobacco. They instead contain plant fiber. When I asked them about the name, they told me Paz means "peace" in Spanish, because snusers are engaged in fights around the world for the right to use snus. They also told me in Hebrew it means "golden", for the golden age they are moving towards where snus can help millions of people quit smoking. 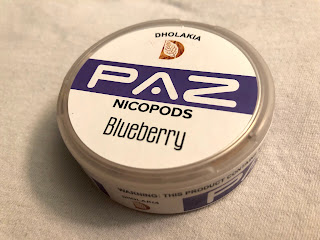 I don't have a flavor description or any can contents, so I used my digital scale to weigh these products out.  In this one, I counted 22 portions, weighing (on average) 0.7 grams each, which means it’s a 15.4 gram can.  I was told the nicotine content is 14mg/g (1.4%), which would be 9.8mg/portion. 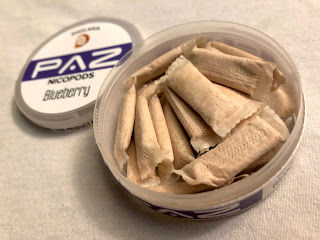 Paz Blueberry has a mild, lightly sweet blueberry smell. Both the aroma and the flavor reminds me a lot of Bubblicious Blue Blowout bubblegum. The portions, are soft and comfortable in the lip, but a little dryer than other nicotine pouches I’ve had before. That’s not a bad thing, though. The flavor is a mild, gentle, lightly sweet blueberry flavor that again, reminds me of blueberry bubblegum. The nicotine packs quite a punch. Though only 14mg/g, it feels much, much stronger. The flavor, on average, lasts about 45 minutes. 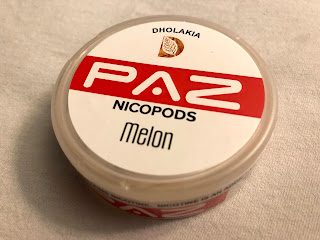 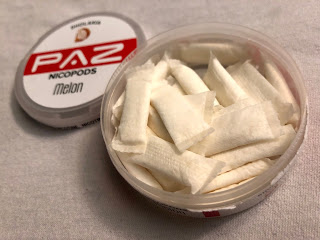 When you open the can, the aroma is a light melon smell, close to a honeydew but with a little cantaloupe hint. It’s gentle, and not overly in your face or too sweet. The portions are slim, and comfortable in the lip. They’re a little dryer to the touch, but not too dry. The flavor is a light, fresh melon taste. It reminds me of honeydew, like the aroma. It has a touch of sweetness to it, but it isn’t overdone. The nicotine packs a solid kick. Though only 14mg/g, it feels much stronger. The flavor, on average, lasts about 45 minutes.

I enjoyed both of these products and was impressed with Dholakia's first offerings.  Both these and their snus products were pretty tasty.  I'm not sure when they'll go on sale or who will sell them, but if you end up with access to these or their snus products, they're both worth a try!
Posted by Chad Jones at 10:00 AM