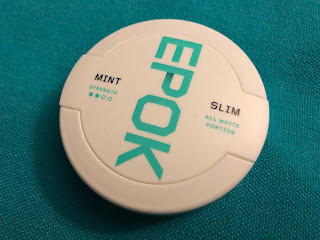 Winnington/BAT, makers of Epok Snus and Lyft, have joined the growing Nordic Chew/"Chew Bag" category by releasing chew bag/chewing tobacco (or "tyggetobak", as the can says) versions of the Epok line. These products were recently released in Denmark, so a special thank to Jakob who hooked me up with these for review. They initially launched three products - Mint, Ice Cool Mint, and Berry Frost. I don't have much more as far as information goes; there's a website on the bottom of the can, Epok.dk, but as of today it still says "coming soon".

I've only seen this for sale on one online shop, but they don't have a flavor description listed.  I'm going to assume it's the same as regular Epok Mint snus - "Epok Mint has a refreshing mint flavor". This product comes in a 16.8 gram can with 24 portions for 0.7 gram portions. I'm going to assume the nicotine content is the same as Epok Mint snus, at 8.5mg/g (0.85%) for 5.95mg/portion. 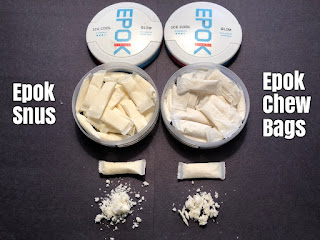 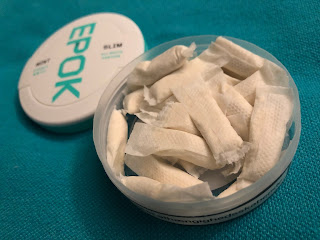 If you've had regular Epok Mint Snus, this one reminds me a lot of that one.  This product has a mild, fresh mint smell. It seems like a mix of spearmint and peppermint. The portions are slim, soft, and comfortable in the lip. They’re a little dryer to the touch than Epok snus, but not uncomfortable. Under the lip you’ll notice a light burn, which gives way to a gentle cooling presence. The flavor is a fresh mint flavor that, like the aroma, seems to be a mix of spearmint and peppermint. It’s mild, and lightly sweet.  The flavor is pretty well rounded. The nicotine strength feels to be about the regular level. The flavor, on average, lasts about 45-50 minutes.

I found this to be pretty close to regular Epok Mint Snus.  If you have access to this and can't get the snus version, give it a try!  As far as where to get it, as of the date of this article I've only seen one webshop that sells it - kioskenrodbyhavn.dk.  You can grab some from there!
Posted by Chad Jones at 10:00 AM