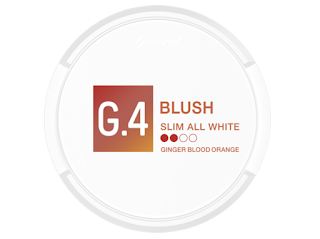 Today, Swedish Match announced a new release in their G4 line: G4 Blush: Ginger Blood Orange. Their G4 line is their white tobacco line, which makes this release very interesting. Until now, their G4 line has only consisted of products with the mint flavor. This shows that Swedish Match is looking to branch out and try new things in this line. This product is said to have "bright and spicy character with clear elements of ginger and blood orange".  It is also said to have hints of bitter orange and carrot.  It comes in a 19.2 gram can with 24 portions for 0.8 gram portions. The nicotine content is 12mg/g (1.2%) or 9.6mg/portion.  This product is available now on the Swedish Match e-store and hopefully soon to e-stores that ship to the US!
Posted by Chad Jones at 7:58 AM