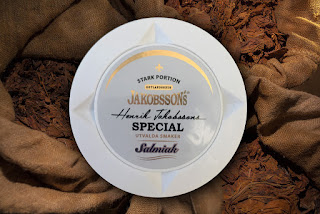 Back in 2014, Gotlandssnus discontinued their Jakobsson's Licorice product, formerly known as Gotlandssnus Grey/Gotlandssnus Anis. Since then, they haven't produced a licorice snus, which is a rarity in the snus world. That is changing soon with the release of Jakobsson's Special Salmiak! Some of you may remember that recently they released Jakobsson's Special Cola, which apparently proved to be popular as it became a full time addition to their lineup. I imagine that would be a similar situation to the release of this new product.  I'm very excited to try it, as I love the taste of salmiak! 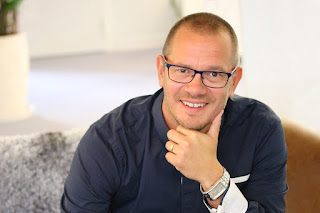 This is what Gotlandssnus had to say about the product:

Now, Henrik Jakobsson releases his second edition for this year: Henrik Jakobsson's Special with taste of salmiak.  A salmiak snus with a clear taste of salt. In early October, the product will be launched via a few retailers.  "After extensive development, we have once again managed to develop a clear and qualitative product. I feel really satisfied with the salmiak flavor and personally think we have succeeded in producing a unique salmiak product, "says Henrik Jakobsson, CEO and founder of Gotlandssnus.  "Henrik Jakobsson's Specially-Chosen Tastes" is a new concept from Gotlandssnus for this year. There are special editions where Henrik Jakobsson, the founder of the company, is testing completely new unique flavors.  "Our last release, Strong Cola, became a success. It will be very exciting to now follow the feedback and feedback for the salmiak business. We strongly believe in the taste and hope it will be well received in the market, "says Håkan Solberg, Marketing Manager at Gotlandssnus.

Jakobsson's Special Salmiak will be sold from October as a special edition via a few retailers."
Posted by Chad Jones at 6:58 PM