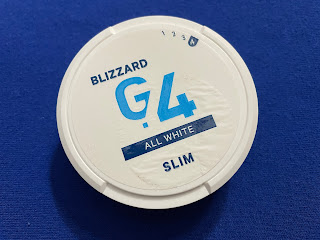 Review Updated:  21 September 2021
The G4 mint line has become somewhat of a favorite of mine over the past several months.   I generally use mint snus at night after I brush my teeth, and it's usually what I sleep with in my lip at night.  However, I got tired of stains on the pillowcases.  I tried nicotine pouches, and they just didn't feel right.  I tried G4 Blue Mint, because of the white tobacco in it, and I found these white tobacco products felt right and had that "snus feeling" in the lip, but with the "all white" experience.  The flavor description for this one says, "An icy sensation and a strong long lasting taste of cool mint."  Each can weighs 19.2g and has 24 portions, for 0.8g portions.  The nicotine strength is 17mg/g (1.7%), or 13.6mg/portion. 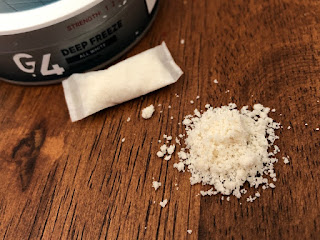 If you're not familiar with G.4, here's a shot of an open G4 pouch and the material inside.  This is how Swedish Match describes the G.4 line:  "G.4 is the fourth generation of snus from General and the latest step we have taken in the development of the snus of the future.  Snus users are increasingly demanding whiter products, but do not want to give up the traditional snus experience. Thanks to new technology, we have been able to produce completely white portions, with the same type consistency and feel as traditional snus in the white format, but without any trace of tobacco taste.  Due to a composition of plant fiber and a small proportion of white tobacco, G.4 is an all-white snus before, during and after use." 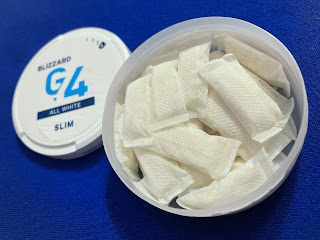 When you open the can you're greeted by a rather smooth aroma of peppermint.  It's not really in your face, or too overly sharp.  It's a little sweeter than the regular G4 Blue Mint in nature.  The portions are slim, soft, and moderately moist.  They feel comfortable under the lip, and come with a cooling presence in the lip.  In terms of flavor, there's a smooth taste of peppermint.  Again, it's a little sweeter than G4 Blue Mint but not too sweet.  It's mellow, and refreshing.  The nicotine strength on this one feels about the strong level; not too strong, not too weak, right there in the middle.  It's not going to knock you out, by any means.  The flavor seems to hang around for about 45-50 minutes on average.
Rating and Final Thoughts
I rated this one at 3.67 out of 5.  It's a pretty solid product if you're looking for something in the all white format, but with a little more nicotine.  In my opinion, white tobacco products like G4 feel a little more full in nature than nicotine pouches, and also give you that "all white" experience.  If you like mint products but want an all white with a little more kick to it, this is a good one to check out!