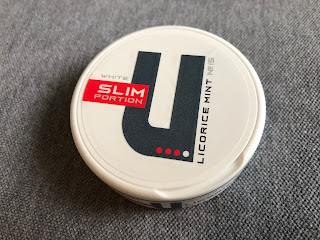 The U-Sample line from AG Snus recently went through a redesign, so even though it's been a year since I reviewed this stuff, I decided to revisit it!

Now, to preface this review, I am a fan of licorice snus, and I'm a fan of mint snus.  However, I've never been a fan of mixing licorice and mint; I just want to be upfront about that!  I do try to remain objective in my reviews, but I also like to be honest.  When it comes to this one, the product description says, "U Sample No.15 Licorice Mint Slim Extra Strong White Portion Snus is a combination of fresh mint and licorice with a great nicotine kick.." This product comes in a 16.8 gram can with 24 portions for 0.7 gram portions. The nicotine content is 17mg/g (1.7%), which breaks down to 11.90mg/portion.  The can design is virtually identical to the U-Sample chew bag cans. 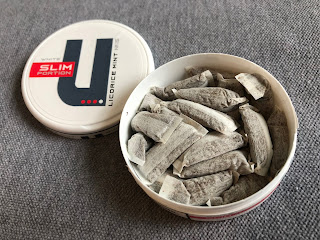 When you open the can, the aroma that comes through is a present and mildly sweet smell of licorice. I don't smell any mint in the aroma, but there is a cooling presence to the smell, if that makes any sense. The portions are slim, soft, and comfortable to the touch. When you put a portion in the lip, you'll also encounter a mild cooling sensation in the lip and throughout the mouth. The flavor of licorice is relatively mellow, and is accompanied by a refreshing flavor of menthol. Though the flavor says it's licorice mint, I don't taste mint - it seems more like menthol. The two flavors work pretty well together and the menthol isn't too obtrusive or in your face. The flavor lasts a good amount of time; I've found these last for a little bit over an hour. The nicotine kick feels to be between a strong and an extra strong.

Now, as I mentioned, I'm not a fan of mixing licorice and mint.  So, this product isn't for me.  But, I can say it tastes better than other licorice/mint products I've tried in the past.  If you're into that kind of thing, give it a try!
Posted by Chad Jones at 7:00 PM